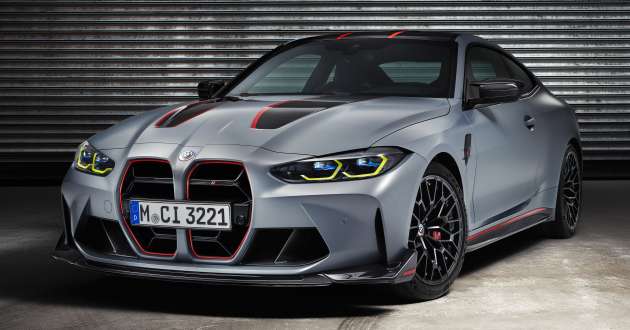 CSL. The last time BMW applied these three letters to a production car was the E46 M3 CSL, which made its debut in 2003. It’s been 19 years since then, and in 2022, BMW is celebrating the 50th anniversary of its famed M division and to mark the semicentenary, the company has brought back the legend that is the CSL. Welcome everyone to the new G82 BMW M4 CSL.

Set to be produced at BMW Group Plant Dingolfing from July 2022, the M4 CSL is the fastest series production BMW to lap the Nürburgring Nordschleife (proof below), setting a time of 7 minutes 15.677 seconds on the version of the track traditionally used for comparison purposes, which is 20.6 km in length. On the longer 20.832-km circuit, the time recorded as 7 minutes 20.207 seconds.

The gain is a result of the increased charge pressure of the two mono-scroll turbochargers from 1.7 to 2.1 bar, along with the use of an indirect intercooler supplied by a low-temperature circuit and specially designed compressors. As for getting power down to the road, there’s an eight-speed M Steptronic transmission with Drivelogic to channel drive exclusively to the rear wheels. Performance-wise, it takes just 3.7 seconds for the M4 CSL to get from 0-100 km/h and the sprint to 200 km/h from a standing start is done in 10.7 seconds – 0.2 seconds and 1.8 seconds quicker than the M4 Competition respectively. The top speed is electronically limited to 307 km/h – 17 km/h more than the M4 Competition with the M Driver’s Package.

Besides the added grunt, the M4 CSL is also 100 kg lighter than the M4 Competition at 1,625 kg thanks to several weight-saving measures. These include fitting M Carbon full bucket seats that shave off 24 kg, while throwing out the rear seats and paring back the amount of soundproofing cuts another 21 kg and 15 kg respectively. A lot of the interior components are made entirely from CFRP (carbon-fibre-reinforced polymer) too, including the centre console.

On the outside, the use of M Carbon ceramic brakes (400 mm front discs, 380 mm rear discs), light-alloy wheels, springs and struts reduce weight by around another 21 kg. The M4 Competition already came with a roof made from CFRP, and on the M4 CSL, the material is used for the bonnet, splitters, and boot lid (with a sizeable ducktail spoiler) to deduct another 11 kg. 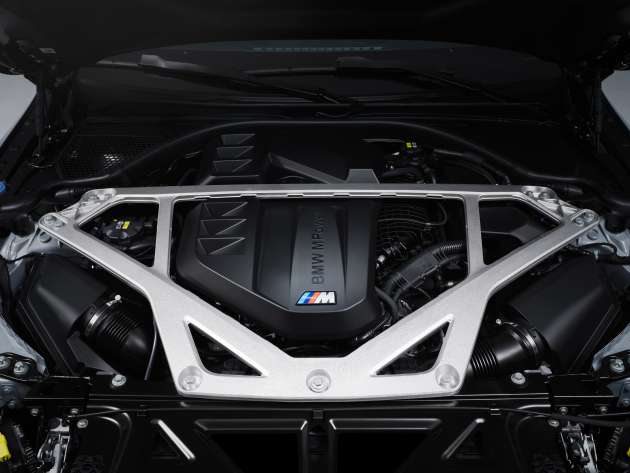 You’ll also notice the skeleton-like grille, which is specific to the special-edition model and brings a weight reduction of 0.5 kg. Remember that titanium rear silencer from earlier? Well, that is 4.3 kg lighter than a conventional steel equivalent silencer.

After enhancing the engine and putting the M4 CSL on a diet, BMW engineers turned their attention to improving the chassis. First up, firmer engine mounts with spring rates of 1,000 N/mm are fitted, which is higher than the M4 Competition that has 580 N/mm on the left side and 900 N/mm on the right side.

Similarly, the transmission mount has a Shore hardness value of 55 instead of 49, while under the bonnet, newly-developed front-end strut braces made from cast aluminium help to increase body rigidity for better agility and steering precision. 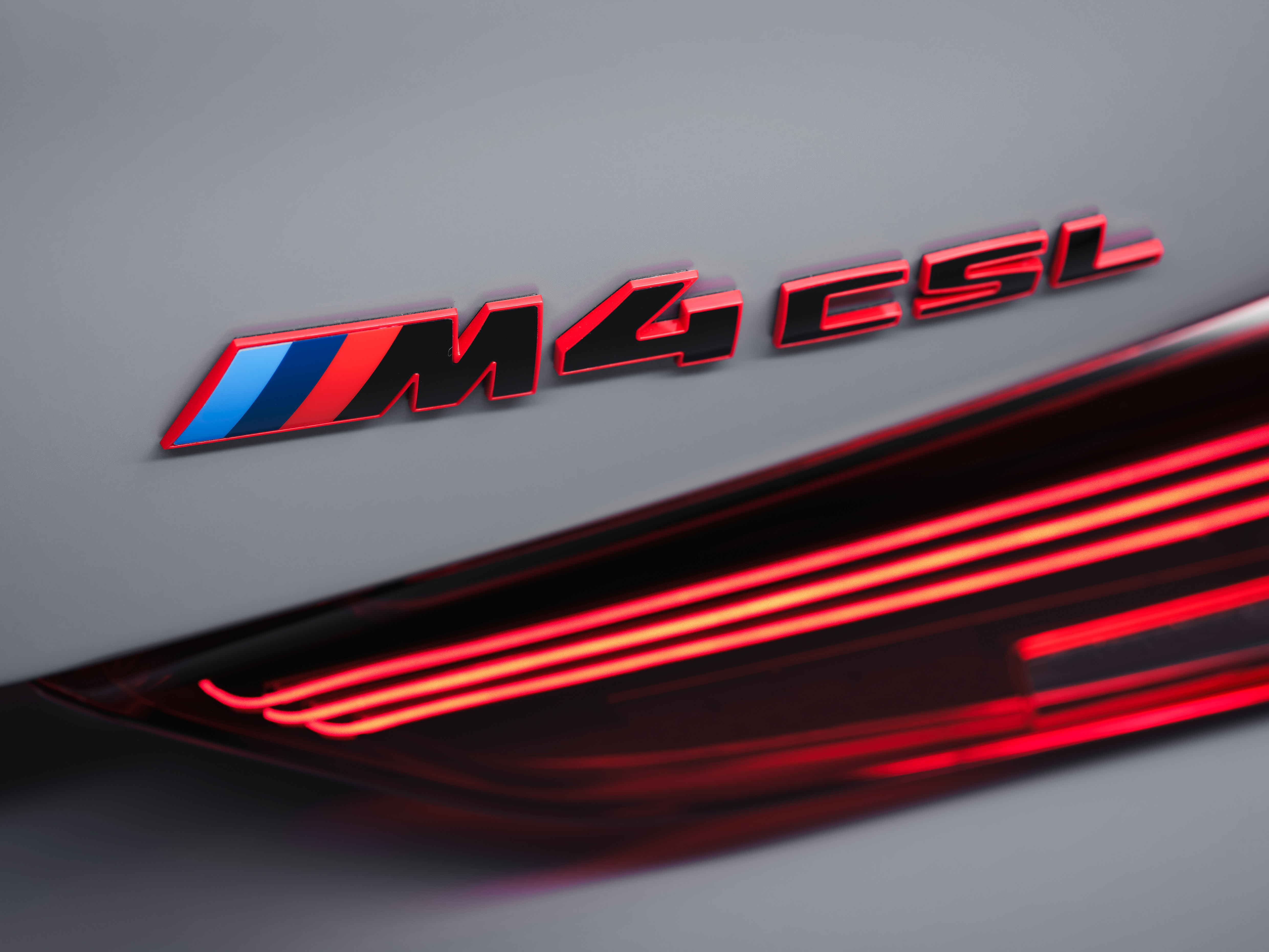 Axle kinematics have been retuned to suit the increased power and lower weight, while the wheel camber settings, dampers, new auxiliary springs and anti-roll bars also get optimised. BMW also says the M4 CSL is eight mm lower compared to the M4 Competition to bring down its centre of gravity. It adds that the front axle’s forged swivel bearing has more camber and the rear axle gets four additional ball joints instead of rubber mounts.

Drivers can adjust the characteristics of drive-related systems by pressing the M Setup button, which allows them to select different drive modes (Road, Sport and Track) or assign personalised settings to the two M buttons on the steering wheel. There’s also the M Traction Control system that ties in with the vehicle’s Dynamic Stability Control, allowing control over the thresholds for wheel slip limitation with stages ranging from one to 10 – one allows for the most slip.

Once all the mechanical upgrades are done, BMW designers went to work to make sure the M4 CSL looked properly special. Obvious giveaways when viewing the vehicle from the front include the large splitters, new grille and carbon bonnet, but there’s also a good helping of red accents and classic BMW Motorsport badging, the latter consist of blue, violet and red segments encircling the BMW roundel.

When specified with the optional BMW Laserlight headlamps, as seen here, you get a yellow daytime running light signature instead of white, like the F90 M5 CS. At the rear, the taillight covers have light threads woven into them, which are illuminated using laser technology for a more distinct take on the L-shaped contour – these cut about 400 grams.

The M4 CSL comes with front 19-inch (with 275/35 profile tyres) and rear 20-inch (with 285/30 profile tyres) wheels as standard and is offered in just three colours, namely Frozen Brooklyn Grey, Alpine White and Sapphire Black. As an option, “BMW M 50 Jahre” emblems can be added too.

As for the interior, we’ve already mentioned the full bucket seats and carbon trim, but there are other changes too. For instance, there’s the M Alcantara steering wheel featuring a red centre marker at the 12 o’clock position and carbon inlays, plenty of red accents, stitching and CSL badges, plus the space left behind by the vacated rear seats has been repurposed to accommodate two helmets.

Equipment-wise, the M4 CSL comes standard with the BMW Live Cockpit Professional system that comprises a 12.3-inch digital instrument cluster and a 10.25-inch infotainment touchscreen. Also included is a head-up display and M Drive Professional, which includes the M Drift Analyser and M Laptimer. Side note, it’s just single-zone climate control instead of dual to help trim the fat.

Given its Nürburgring achievement and capabilities, the M4 CSL will likely be highly sought after, although you’ll want to hurry as production is strictly limited to just 1,000 units. BMW says the most important sales markets for its special-edition model will be the United States, Germany and Great Britain, so it’s going to be a scramble to get an allocation in other markets. Keep in mind that the CSL name has only ever been used on two BMW models, the E46 M3 CSL and the E9 3.0 CSL.