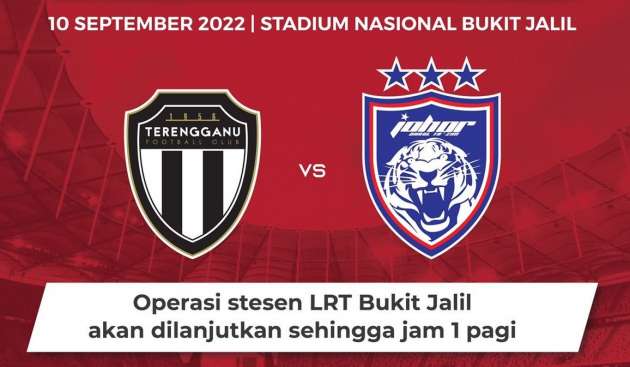 The FA Cup final will be held at the National Stadium in Bukit Jalil tomorrow (September 10). Super League champions Johor Darul Ta’zim (JDT) will be taking on 2011 FA Cup champions Terengganu for honours. The team from the south are favourites, but in finals, anything can happen.

For those heading to the match, it’s wise to take the LRT, specifically the Sri Petaling Line. As expected, Rapid KL will be extending LRT services tomorrow night for the football match – the operator has announced that the LRT Bukit Jalil station’s operations will be extended to 1am, and extra trains will be provided after the match.

Riders are reminded to use Touch n Go cards for a smooth flow. Special areas for solat are available at the Bukit Jalil station. For those who are not watching the match, it’s best to avoid the stadium area if possible, as it will be congested.