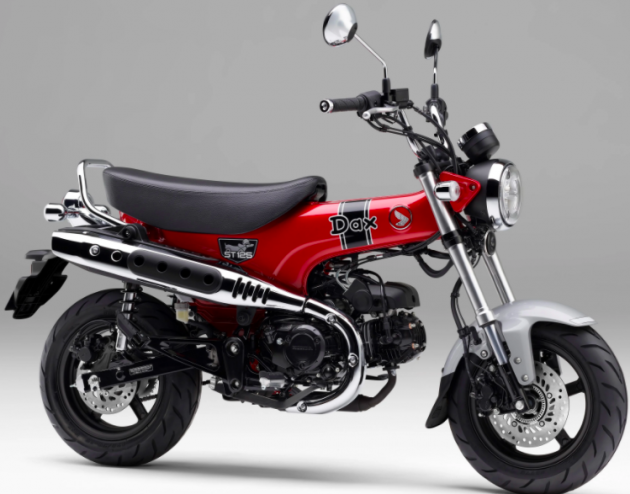 Honda’s other lifestyle motorcycle in Indonesia, the Honda Monkey, goes for 82.53 million rupiah (RM24,869) while in Malaysia, the Monkey when it was introduced here was priced at RM13,999. The Dax has been a evergreen catalogue model for Honda since 1969 and in production in Japan for its domestic market from 1995 to 2003.

The name “Dax” is a contraction of the Dachshund dog breed and this minibike shares underpinnings with Honda’s other minibike, the MSX125 Grom. Power for the Dax ST125 comes from a Euro 5 compliant, air-cooled 124cc, single-cylinder engine mated to a four-speed gearbox with centrifugal clutch.

Single-channel ABS on the ST125 Dax acts on the 220 mm front hydraulic disc, while a 190 mm disc stops the rear wheel. Suspension is done with telescopic forks in front and twin shock absorbers at the back, adjustable for preload.

Inside the cockpit, the round instrument binnacle houses an LCD display with white-on-black readout, while LED lighting is used throughout. Seat height for the Dax is a rider friendly 775 mm and kerb weight is claimed to be 107 kg.