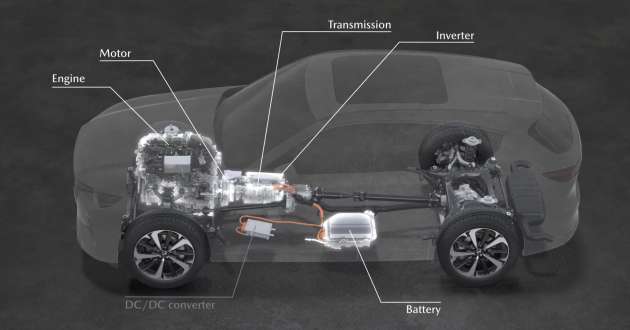 The Mazda CX-60 was revealed back in March this year and represents a new era for the Japanese carmaker, as the model is its first rear-wheel drive-based SUV. Available with new turbodiesel and plug-in hybrid petrol powertrains, both are briefly explained in new videos released by the company not too long ago.

This serves to achieve clean combustion across all engine speeds and better fuel economy, making the six-cylinder unit one of the cleanest diesel engines in the world with a thermal efficiency of over 40%. Following WLTC standards, the CX-60 with the Skyactiv D engine can achieve a fuel economy of up to 19.8 km/l.

The Skyactiv-D engine is also offered with a 48-volt mild hybrid system dubbed M Hybrid Boost, and that version is known as the e-Skyactiv D. The M Hybrid Boost consists of a small lithium-ion battery (0.33 kWh), an inverter, a DC/DC converter and an electric motor/generator rated at 16.3 PS (16 hp or 12 kW) and 153 Nm, which is integrated into the transmission.

The electric motor supports the engine at low loads and engine speeds to improve efficiency, effectively providing electric drive during such instances for a short distance. Meanwhile, the battery can be recharged via the engine or regenerative braking, and when full, surplus energy is used to power in-car electrical components. Following Japanese specifications, the e-Skyactiv D outputs 254 PS at 3,750 rpm and 550 Nm from 1,500 to 2,400 rpm.

Moving on to the plug-in hybrid powertrain, which is a first for Mazda, the setup used in the CX-60 is made up of a Skyactiv-G 2.5 litre naturally-aspirated four-cylinder petrol engine making 192 PS (189 hp or 141 kW) at 6,000 rpm and 261 Nm, also paired with an eight-speed automatic gearbox.

The electrical components are more substantial with the PHEV, as the battery is significantly larger (17.8 kWh) to deliver about 60 km of electric-only range. When depleted, the car supports AC charging up to 7.2 kW (Type 2 connection), with a full charge taking two hours and 20 minutes. Users can also opt for a battery control function where the engine acts as a generator to recharge the battery to a preset state of charge (SoC) or rely on regenerative braking to recuperate energy.

The underfloor-mounted battery is hooked up to a power supply system, DC/DC converter as well as an electric motor that sits between the engine and transmission. The electric motor is rated at 136 PS (134 hp or 100 kW) and 250 Nm and can get the SUV up to 100 km/h without the engine coming into play.

The CX-60 is part of Mazda’s Large Product group together with the upcoming CX-70, CX-80 and CX-90, and is the first to be built on the Skyactiv Multi-Solution Scalable Architecture with a front-engine longitudinal layout and rear-wheel drive. Unlike the CX-50 before it that is specific to North American markets, the CX-60 will be marketed in Europe, Japan, Australia and several other markets, so there is a chance we could be getting it (fingers crossed).

In terms of size, the CX-60 is larger than the current CX-5 and smaller than the CX-9. Compared to the CX-8, the RWD-based SUV is wider but shorter. Besides the six-cylinder turbodiesel and PHEV, the new SUV can also be specified with a conventional Skyactiv-G 2.5 litre NA four-cylinder and there will be an e-Skyactiv X 3.0 litre petrol unit, the latter featuring the company’s Spark Controlled Compression Ignition (SPCCI) technology and M Hybrid Boost system.