2022 Perodua Alza vs Toyota Veloz – RM20k separates the co-developed MPVs, but what are the differences? 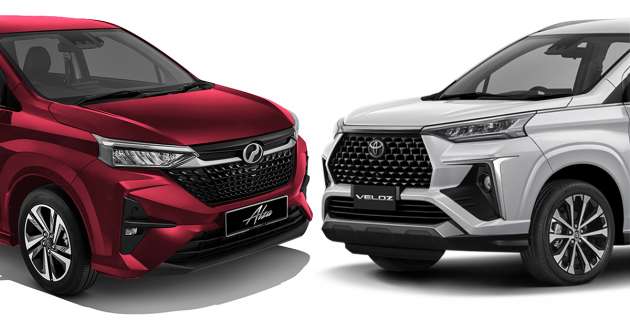 By now, you’ve seen plenty of teasers of the Toyota Veloz, and we also showed you pics of the upcoming MPV uncovered on a transporter near Rawang, which is Perodua’s base. The Veloz is of course a sister car to the recently-launched Perodua Alza, and both are manufactured by Perodua in Sg Choh, north of the Klang Valley.

The Alza has been merged with the Toyota Avanza/Veloz (Veloz is a more upmarket Avanza) and Daihatsu Xenia. All four versions of the seven-seater MPV sit on the Daihatsu New Global Architecture (DNGA) platform, which means that the second-generation Alza moves away from being a JDM rebadge and the Avanza goes from rear-wheel drive to a more sophisticated front-wheel drive base.

In Malaysia, UMW Toyota Motor (UMWT) will only be offering the Veloz (no Avanza) and the positioning of the single-spec MPV will be higher than the Alza, with extra equipment over the already-generous kit list of the Alza, and with a corresponding higher price, of course. The estimated Veloz price is RM95,000 on-the-road without insurance. That’s RM20k more than the top Alza AV. 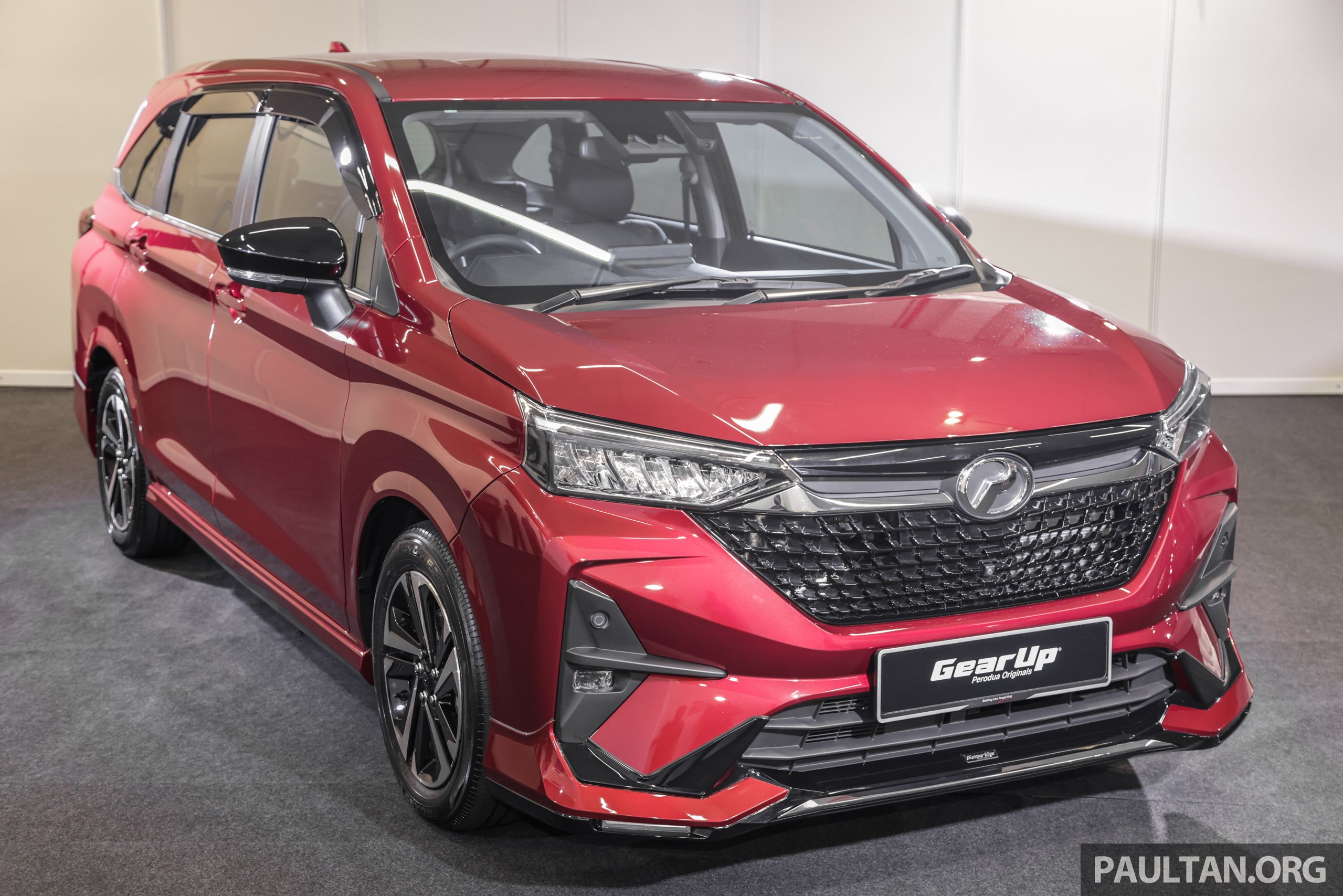 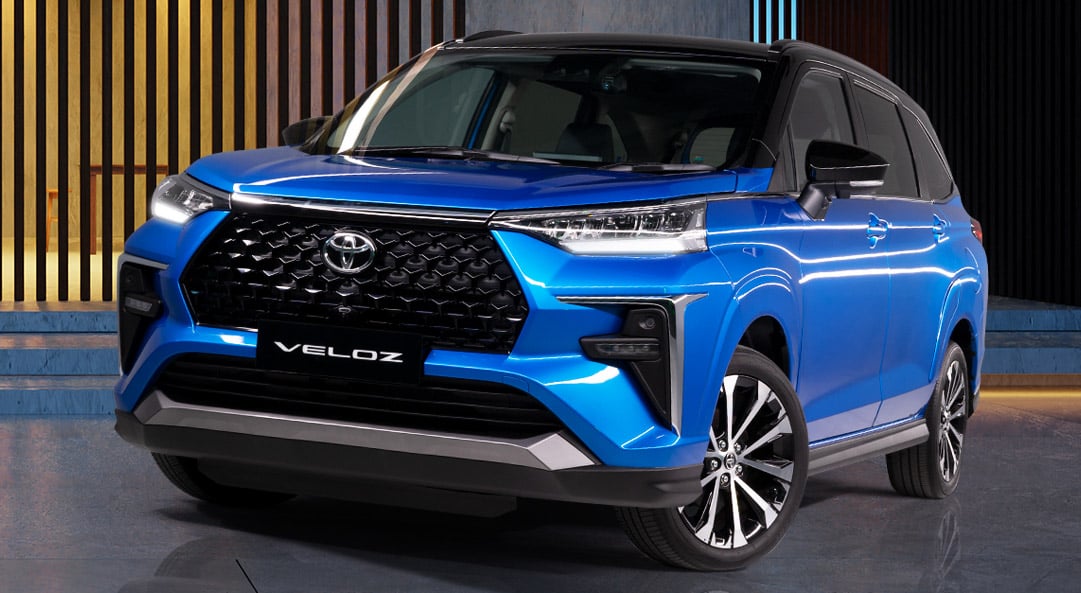 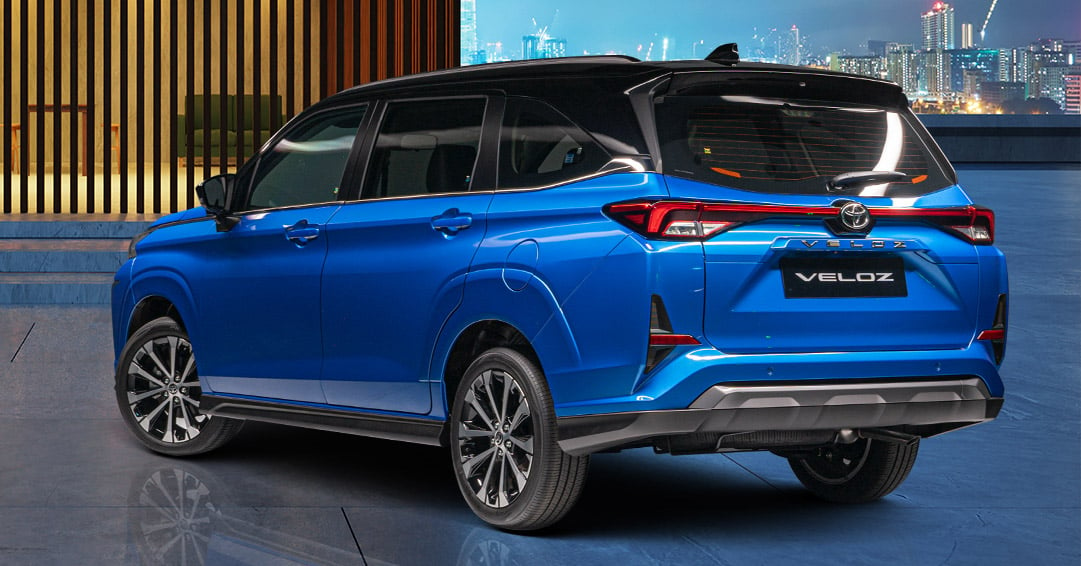 So, what are the visual and equipment differences between the two? It’s a longer list than what’s immediately apparent – let’s go through the points based on what we’ve seen so far, what UMWT has revealed to date, and also the Veloz specs in Indonesia and Thailand.

The Veloz’s overall shape is similar to the Alza’s, and its rear end familiar, but the two have very different faces. While the Alza sports a wide, bowl-shaped grille and an ‘X’ theme, the Veloz features a downturned hexagonal grille. The grille inserts are also different – it’s ‘L’ for the Alza and ‘Y’ for the Veloz, which gets T-shaped chrome accents around the LED fog lamp surrounds.

Speaking of LEDs, the LED headlamps are different and the Toyota gets LED daytime running lights (LED DRLs for the Alza come with the optional GearUp bodykit). The Veloz headlamps are bridged by a chrome strip that tops the grille – these continue on the sides of the bonnet to reach the windowline, and the chrome outline terminates at the rear screen. The Alza AV’s chrome strip starts from the A pillars. 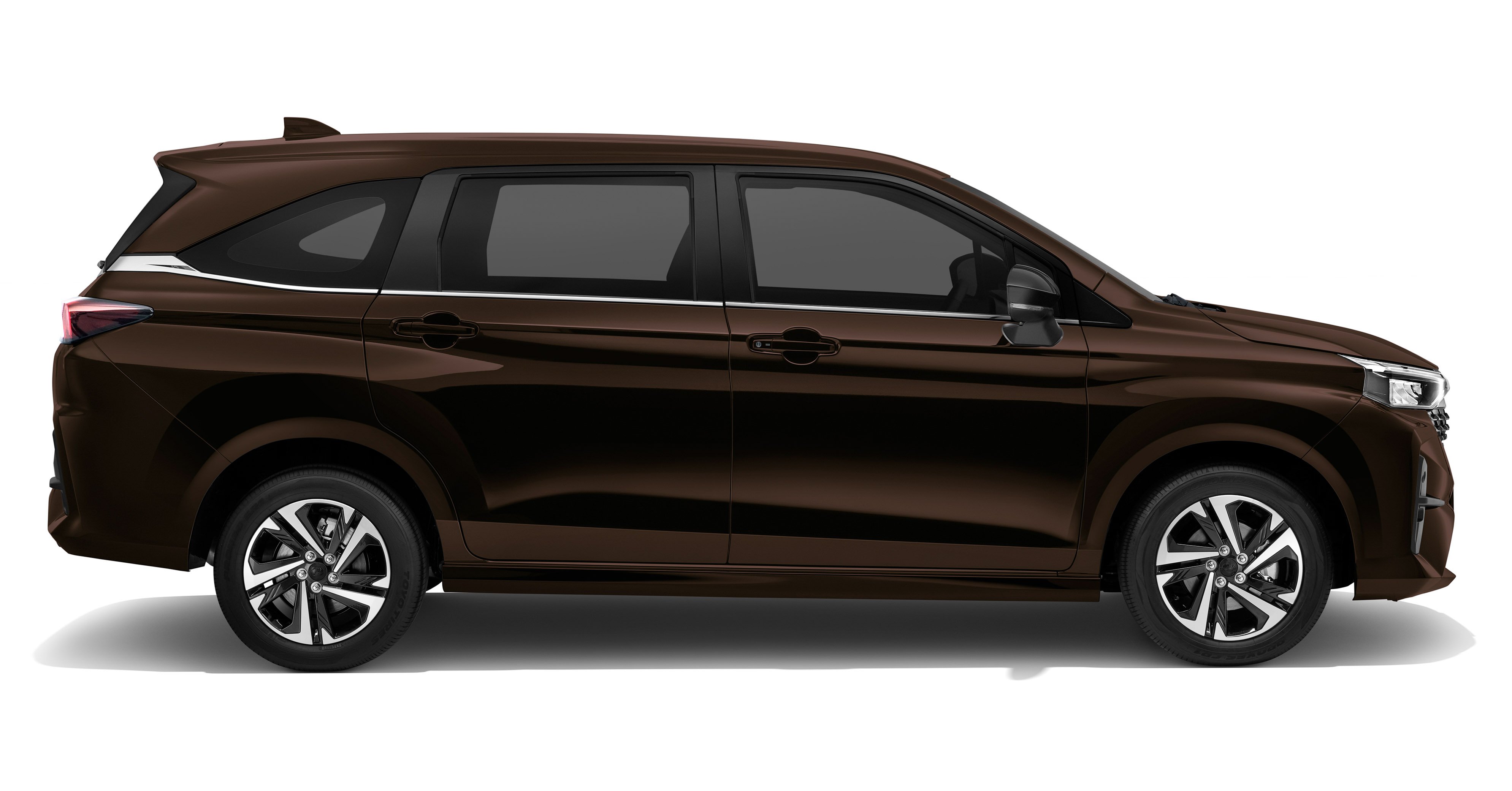 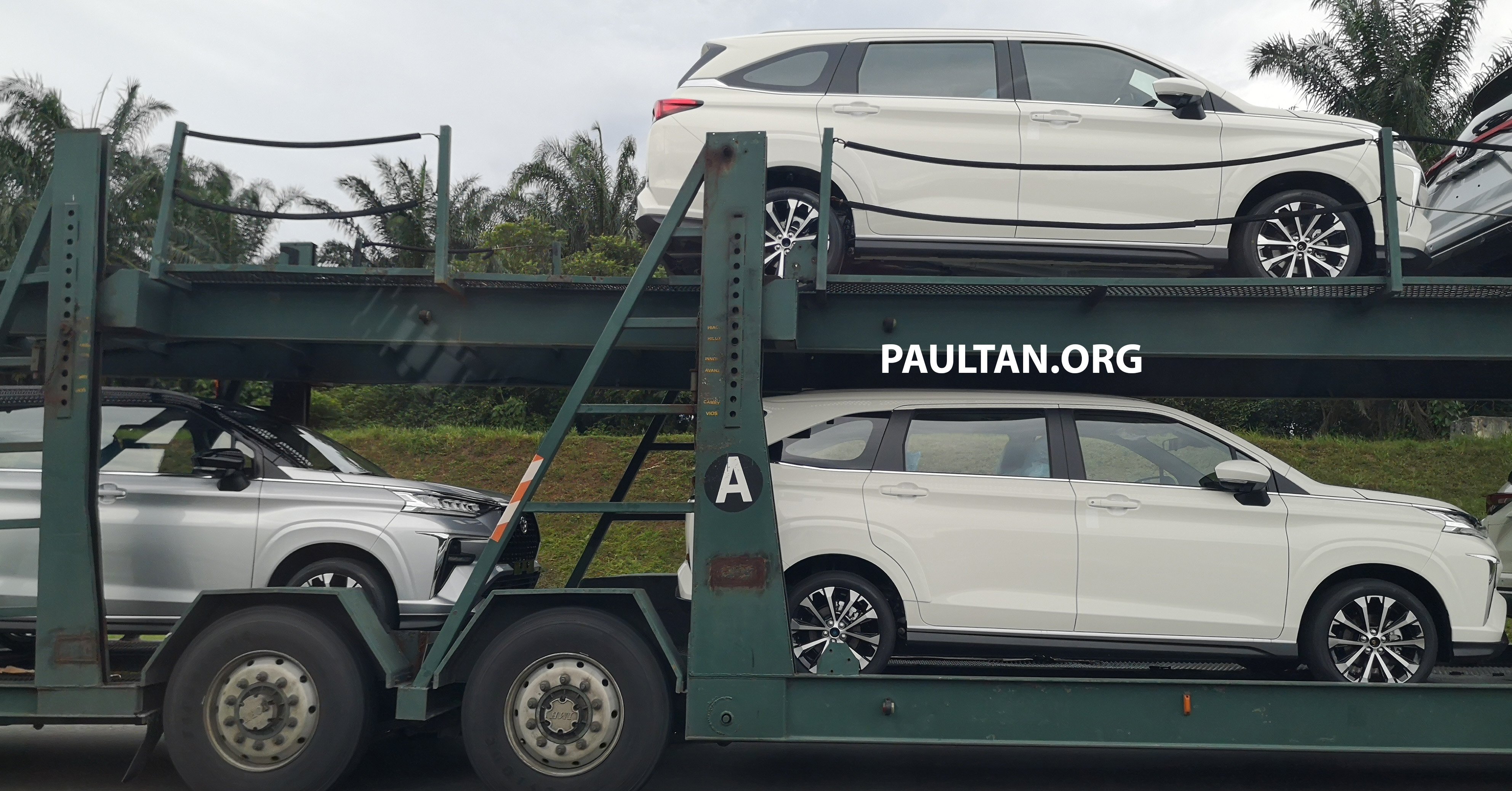 Perhaps more prominent than the face is the stance of the two models. Perodua opted for a low-slung MPV with a car-like ground clearance of 160 mm (150 mm for X, old Alza was 155 mm). In contrast, the Malaysian-spec Veloz GC is 190 mm, which is 30 mm higher and more typical of a Low MPV. The stance difference is immediately apparent. Note that 190 mm is lower than the Indonesian-spec Veloz’s 205 mm. If you want to compare, the Perodua Aruz/Toyota Rush has a GC of 220 mm and the Mitsubishi Xpander‘s GC is 205 mm.

Which is better is down to preference. P2 touts easy entry/exit for children and the elderly (lower boot load lip is also an advantage), while Toyota says that you won’t need to “worry about damaging the undercarriage while going over rough terrain, speed bumps or pot holes” with their taller car. Which side are you on?

Before you answer, get a good look at both cars in the metal. The Veloz wears 17-inch two-tone multi-spoke alloys, which are an inch larger than the Alza AV’s blade-style two-tone items, which look just about right with the lowered body. The Veloz comes in five colours – white, silver, red Metallic, “Bluish Black” and the signature blue you see in the ads. A black roof for a two-tone look is exclusive to the Toyota. We also see what appears to be roof rails. 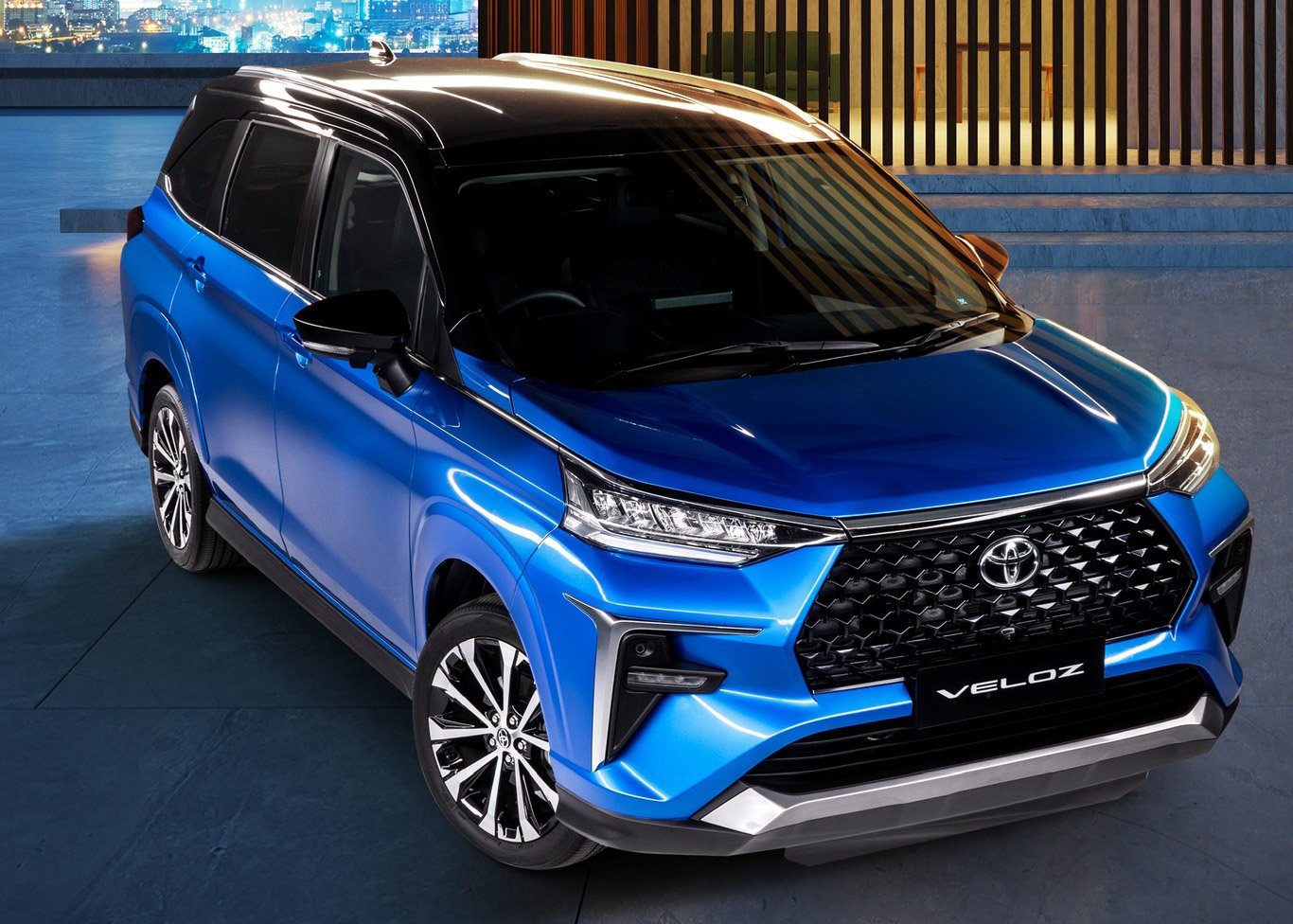 Lastly, the outer tail lamps are shared, but only the Veloz sports a red line all the way to the central emblem, and it also has the model name spelled out between the T logo and the number plate recess. The Alza’s retro-style wordmark is at the edge of the hatch. The bumpers and reflector surrounds are different, and the Veloz’s silver centre section has a more “SUV look” with indents mimicking skid plates.

Slightly chunkier bodywork at the bumpers and wheelarches means that the Veloz has a slightly bigger footprint (4,475 mm long, +50 mm over Alza; 1,750 mm wide, +20 mm over Alza), although you most likely won’t notice this, just the height difference.

Inside, the main dashboard moulding is shared, but the Veloz gets its own central air con vent design. Above that is a 9.0-inch touchscreen infotainment system that’s different from the Alza’s, even if the 9.0″ size is similar. Toyota’s HU supports wireless Apple CarPlay and Android Auto, while the Alza tops out at wired Android Auto on the top AV. 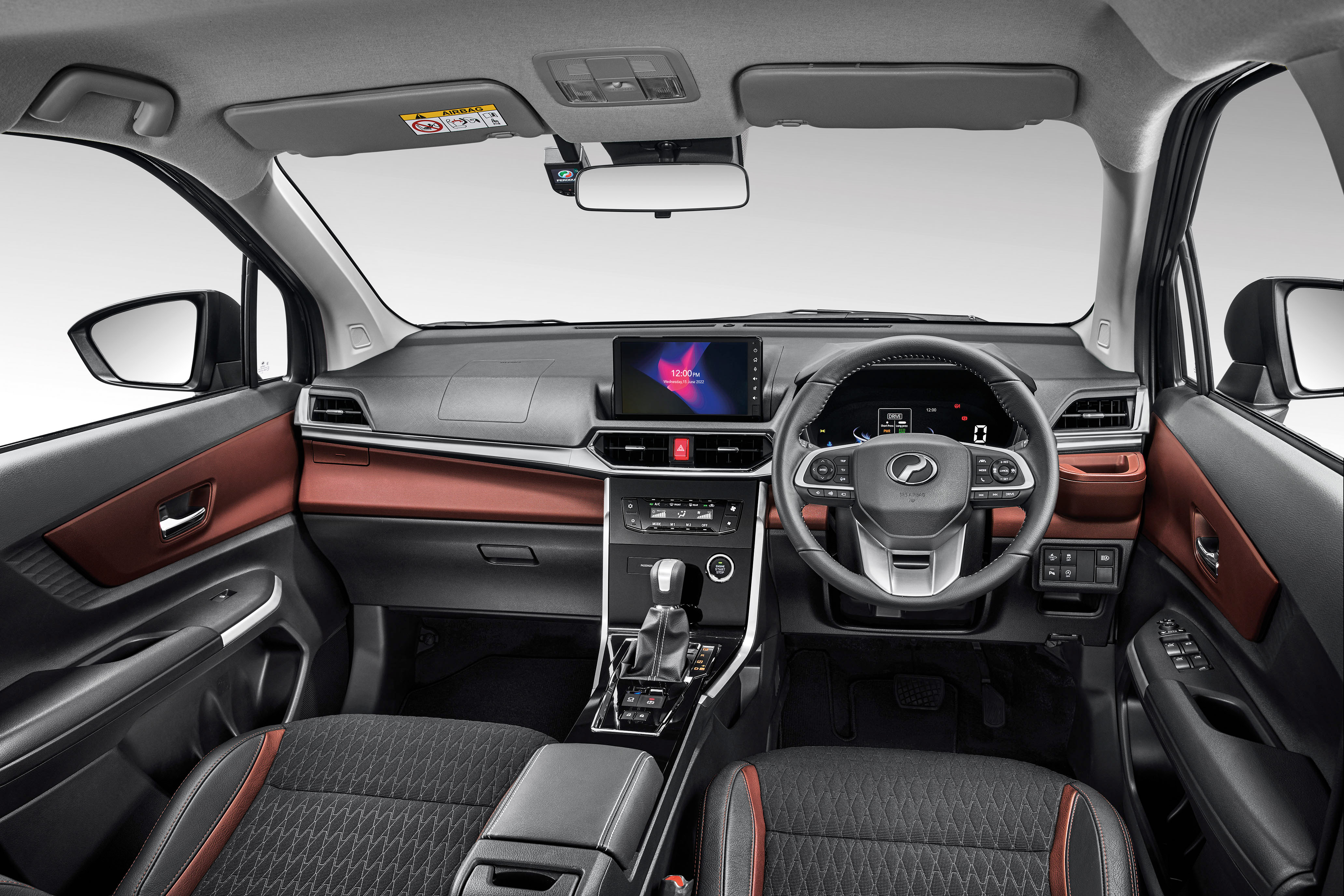 While the digital meter panel and steering wheel are shared, each brand uses its own single-zone digital AC control panel. You’ll see that the Toyota’s panel has two round knobs and an automatic function – the Alza’s panel, which is from the Ativa, has no auto climate control, but there are two memory positions. The Veloz also adds on a Qi wireless phone charger behind the gear lever.

The Alza AV has a rather unique two-tone dash with dark red as the contrast colour – this is light grey in the Veloz. The Toyota’s door cards are also different – note the chunky door pulls like what we see in the Ativa/Rocky/Raize; this is not present in the Alza. The Veloz also appears to have blue ambient lighting on the doors and centre stack.

Also – and this can be a significant item for some – the Veloz is set to come with telescopic adjustment for its steering. The Alza’s wheel only adjusts for tilt. Expect the Toyota to have a keyless entry sensor on the passenger door handle. Perodua typically omits this – it’s touch once on the driver’s side to unlock it, touch twice to unlock all doors. 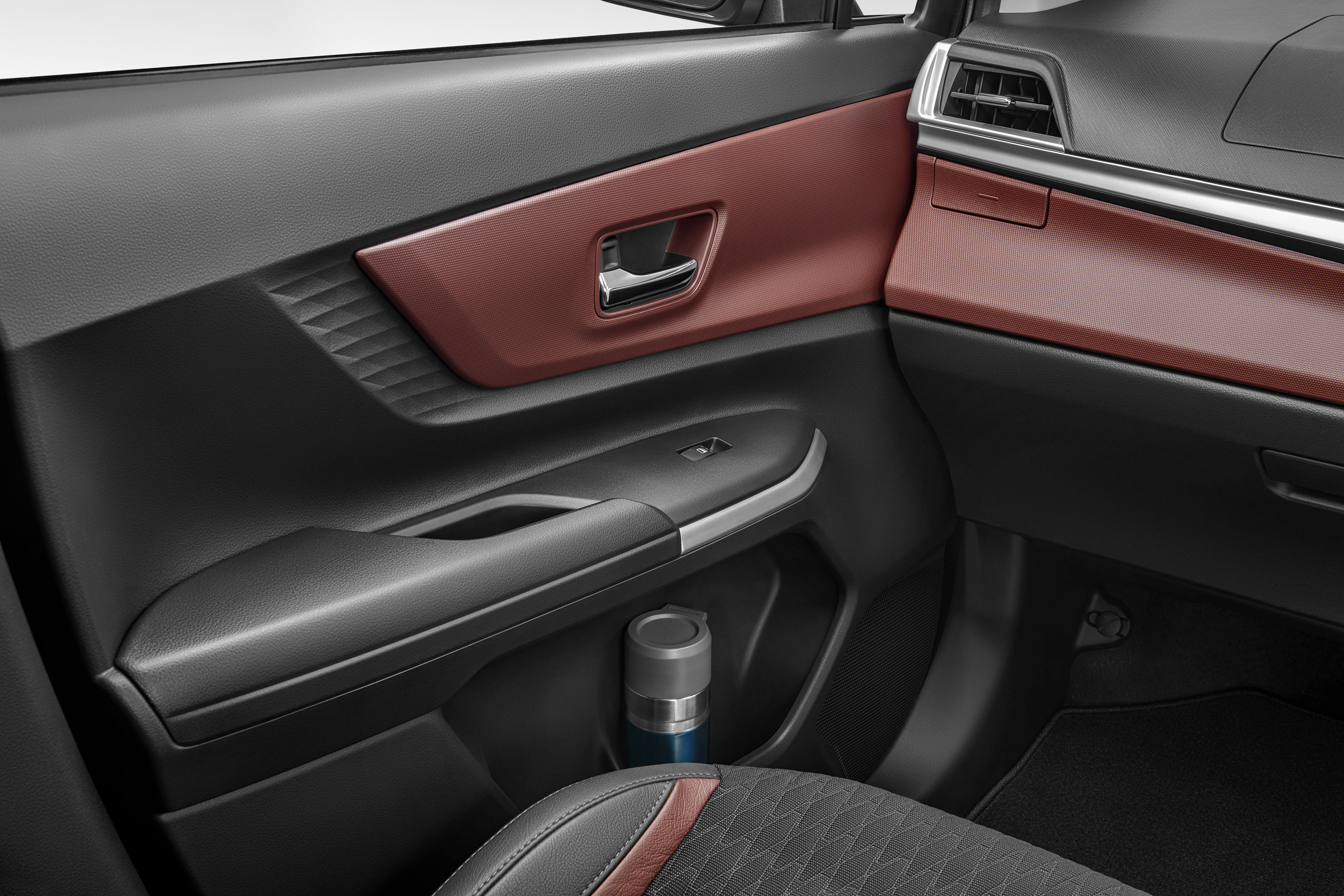 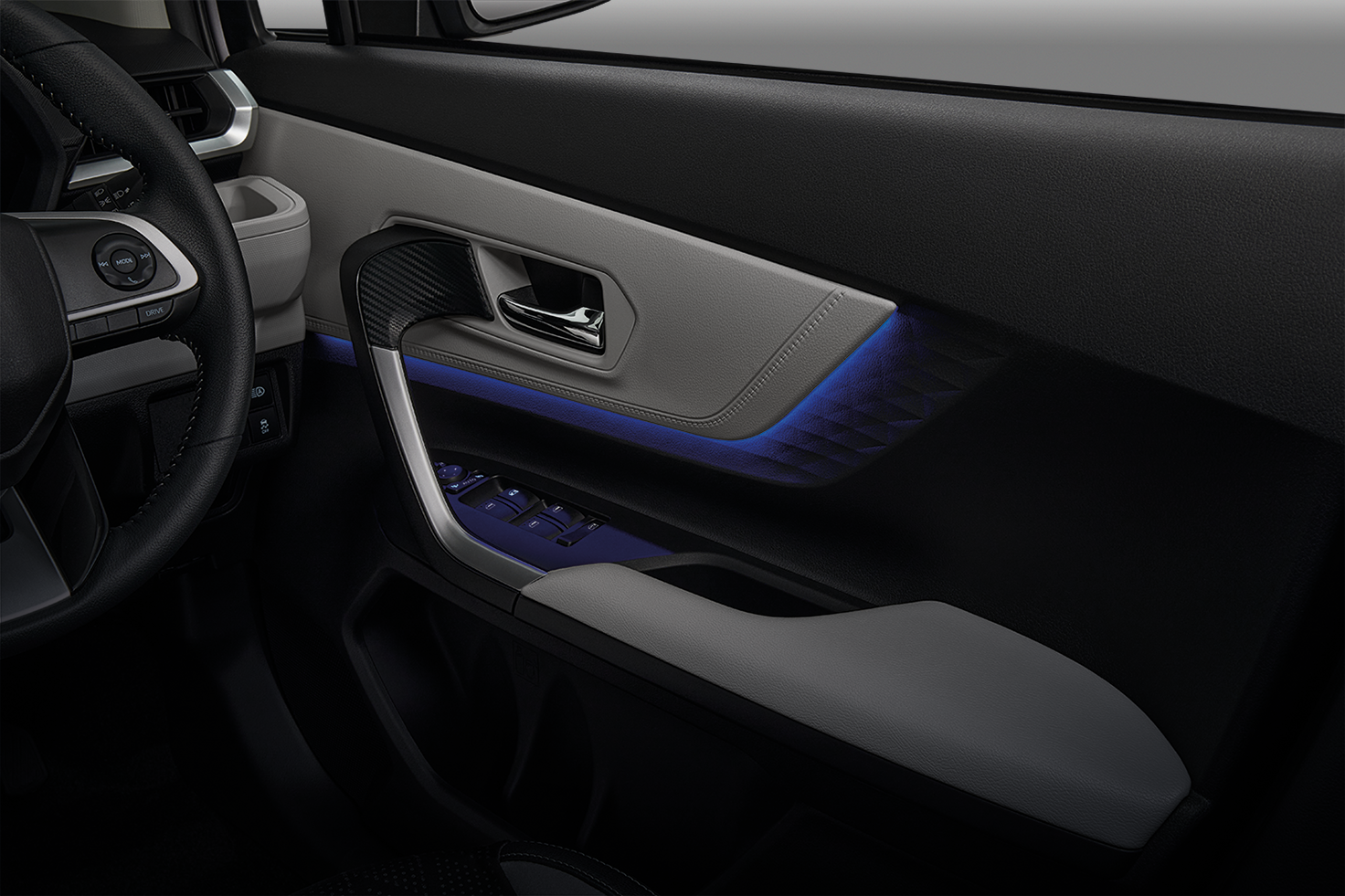 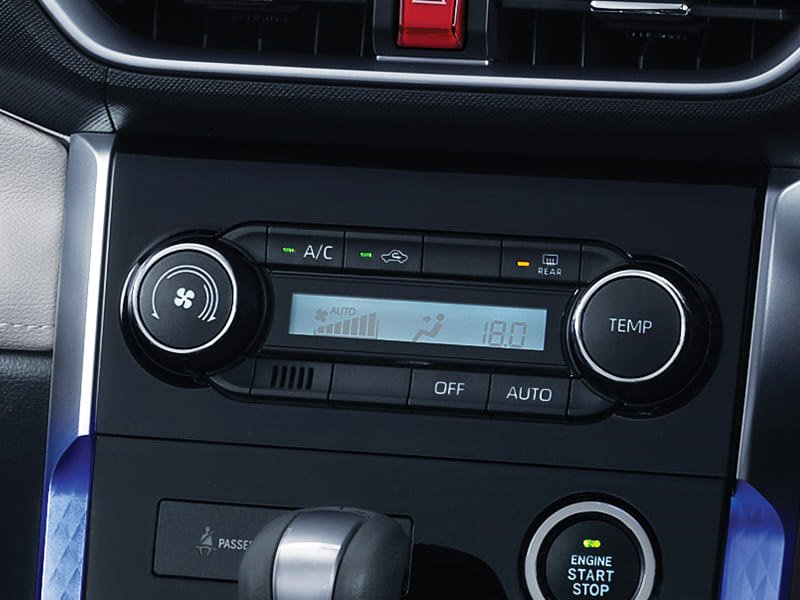 There should be some trim differences as well. We see that the leather seats on the Veloz have a different quilted pattern, and the chairs don’t have the red bits from the Alza AV, obviously. The top Alza’s seats are part-leather with some fabric sections – the Veloz’s chairs are fully covered in leather. There could also be additional soft-touch padding too – we’ll see.

That’s all we have for now based on what has been revealed. Suspension aside, both DNGA-based sisters are similar under the skin, sharing the same Perodua-made 1.5L Dual VVT-i engine and D-CVT gearbox with manual mode. In the Alza, the Euro 4 2NR-VE makes 105 hp and 138 Nm of torque at 4,200 rpm, which is 3 hp and 1 Nm more than in the Myvi (102 hp/137 Nm). Auto start-stop is standard.

The Alza has selectable Drive Modes where the driver can choose between Normal, Eco and Power modes via a ‘DRIVE’ steering button on the right spoke. This should also be on the Veloz. P2 claims fuel consumption of 22 km/l in what it calls the Malaysian Driving Cycle, which supposedly reflects local conditions. It’s 18.9 km/l in the more familiar NEDC. Expect slightly higher FC on the heavier Veloz, which also rolls on bigger wheels. 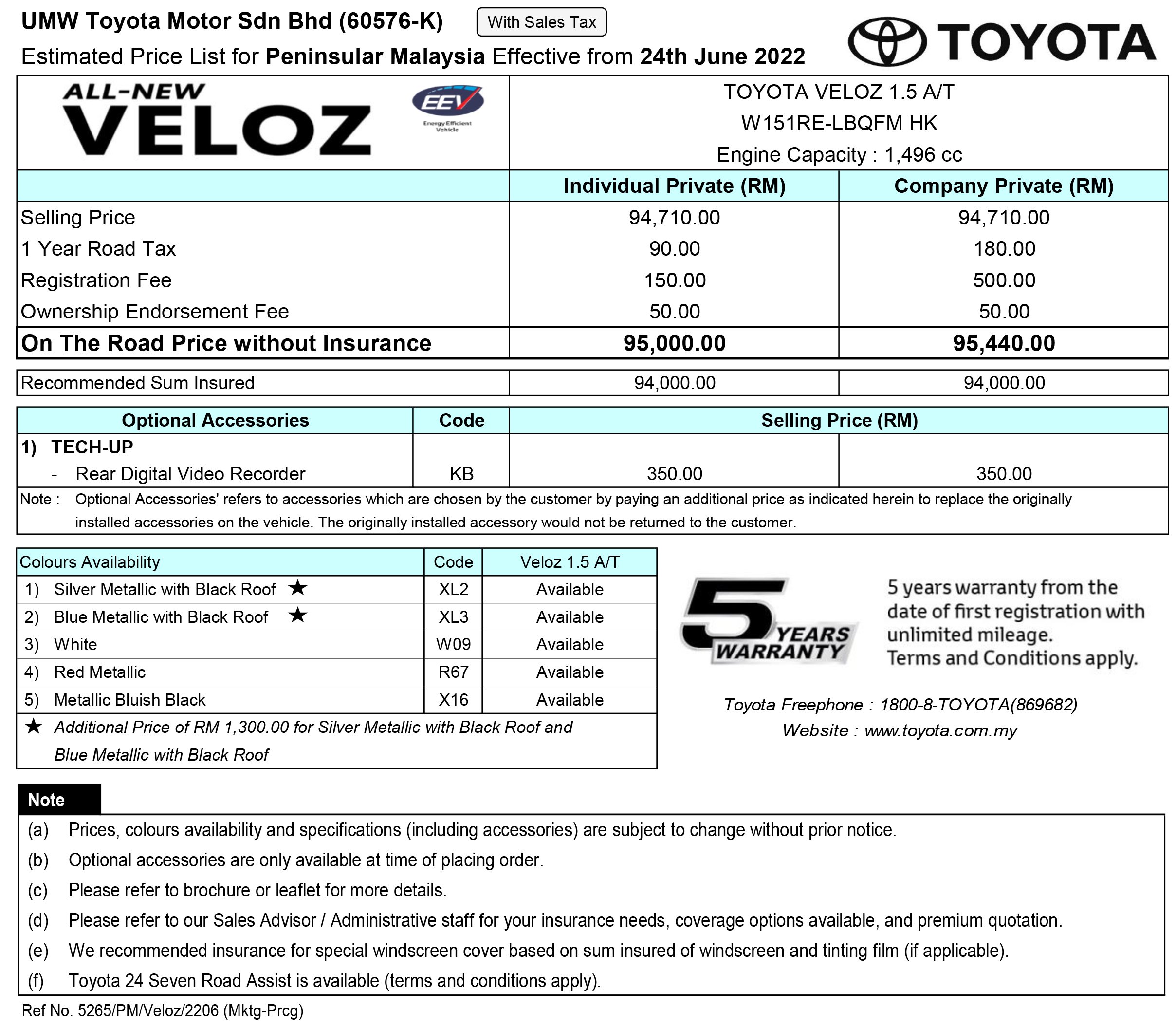 Compared to the other pair of Perodua-Toyota seven-seater twins – the Aruz and Rush – the differentiation here is greater in terms of equipment and body panels, inside and out. For those who have half a mind on converting the Alza into “a Toyota”, it will be much harder than the Ativa-Raize bumper job, although I don’t see much incentive given that there’s nothing JDM about this Toyota.

So, all the above plus the Toyota brand for around RM20k more over the RM75,500 Alza – what’s your take? Also, brand aside, which of the two looks do you prefer?