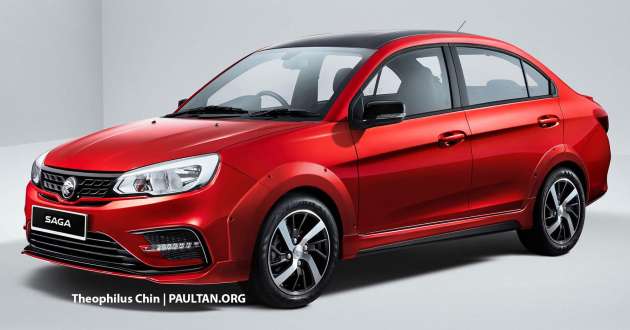 The 2022 Proton Saga MC2 facelift was launched just yesterday, and it didn’t take long for rendering wiz Theophilus Chin to start fiddling with the A-segment sedan. What he came up with is a Saga made to appear more rugged by adopting elements from the Iriz Active.

Introduced in August last year, the Iriz Active is the range-topping variant of Proton’s hatchback and is visually differentiated from lesser options by its distinctive fender extensions, which have been morphed and adapted to fit the Saga Active that Theo created.

However, where the Iriz Active’s fender extensions were finished in black, they are body-coloured for in this instance. Theo also did the same for the hatchback and if you want to see what that looks like, head on over here. Besides the wider body, the Saga Active also gets matching side skirts and wheels that are an inch larger at 16 inches (the Saga’s largest are 15 inches) to match the Iriz Active, albeit with the same “four-spoke-style.” Also rendered on are the car’s black roof and window frames.

So, what do you think of Theo’s Saga Active? Does it look appealing to you and would you buy such a body kit for your Saga? Let us know your thoughts in the comments below.