The slew of Toyota news continues to come from the United States with the reveal of the 2023 Corolla, giving the 12th-generation sedan and hatchback a well-timed refresh. The world’s largest carmaker appears to be following the template it set with the 2022 RAV4, adding some barely noticeable updates to go with the more substantial updates elsewhere.

By far the biggest change is the option of all-wheel drive for hybrid models, using an additional E-Four electric motor to motivate the rear wheels. No performance figures were released, but Toyota says that the 1.8 litre hybrid powertrain, which currently combines a 97 hp/142 Nm Atkinson-cycle four-cylinder engine and a 71 hp/163 Nm electric motor to produce a total of 121 hp, is more powerful than before.

The revised Corolla Hybrid also gets enhanced brake control and an expanded range of variants, with SE, XSE and XLE variants joining the existing LE. The sportier SE and XSE also get firmer steering from the outgoing Apex Edition.

As for the petrol models, the Direct-Shift CVT – which uses a physical first gear for a more dynamic acceleration feel – is now offered on the 136 hp/171 Nm 1.8 litre Valvematic engine. The transmission, introduced on variants with the 169 hp/205 Nm 2.0 litre Dual VVT-i mill in 2020, is now standard-fit, meaning that the SE and XSE lose the six-speed manual option. Paddle shifters have been added as compensation. 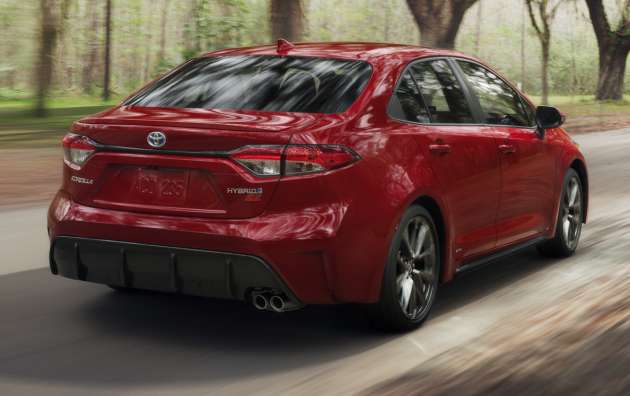 On the outside, the 2023 Corolla is set apart by new LED headlights with prominent C-shaped daytime running lights, first seen on the GR Corolla. These are fitted to SE, XLE and XSE variants of the sedan and all hatchback models, although LED lighting comes as standard. Beyond that, the massive front lower grilles have been revised across all of the three available looks.

The standard L, LE and XLE sedans get a simple linear pattern that narrows towards the top, while the aggressive Sport design on the SE and XSE adds body-coloured fins leading towards the side accent light strips. On the five-door, the fog lights are framed by more substantial C-shaped chrome surrounds that jut out of the revised grille mesh.

There are also new colours on offer, including Underground and Midnight Black Metallic (the latter replacing Black Sand Pearl) for the sedan and the darker Blue Crush Metallic being extended to the hatch as well. Inside, the changes are even more minor and consist of an updated 4.2-inch multi-info display with a digital speed readout and a revised seven-inch digital instrument cluster on XLE and XSE variants. 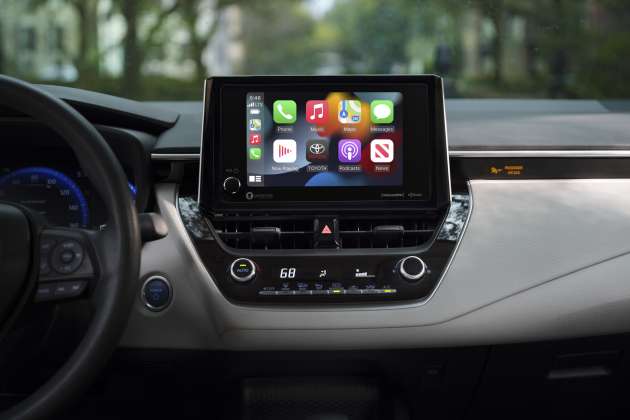 This time around, the yearly trim changes add red accents to the usual black colour option, joining the existing Moonstone grey and Macadamia cream variants. All models now come as standard with an eight-inch touchscreen (up from the base seven-inch display previously) as part of a next-generation infotainment system, with over-the-air software updates, dual Bluetooth device connectivity and wireless Apple CarPlay and Android Auto.