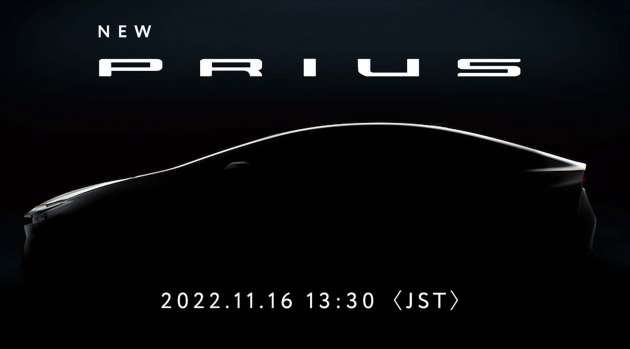 Toyota has announced that the fifth generation Toyota Prius will make its world debut on November 16 2022 at 130pm JST, which would be 1230pm Malaysian time. The current fourth generation Prius has been around since 2015 (facelifted in 2019), so a full model change about now is expected.

A few teaser images have been released ahead of the Prius reveal. The side profile is instantly recognisable as a Prius, with a sleek aero roofline, while the image of the headlamp shows a C-shaped design similiar to that found on the new Toyota Crown series.

The fourth gen Prius can be had as both a hybrid or a plug-in hybrid variant. Will the new Prius stick to the same offering or will it move on to a pure plug-in line-up? We think a non-plug in version will continue to be offered as Toyota still believes in the merits of such a system, recently even launching a new 192 hp 2.0 litre version in the European market 2023 Toyota Corolla.

We never got the fourth gen Prius here in Malaysia, although the third gen sold well. Owners of the third Prius here are still happily driving their cars around, some with pretty high mileage racked up by now, but Toyota’s hybrid system still keeps on going despite some of them needing some battery swaps by now.

When the tax structure changed and CBU hybrids stopped getting tax exemptions, the fourth gen Prius became a casualty and UMW Toyota Motor focused on hybrids that could be CKD-ed, like the Camry Hybrid and most recently the Corolla Cross Hybrid.