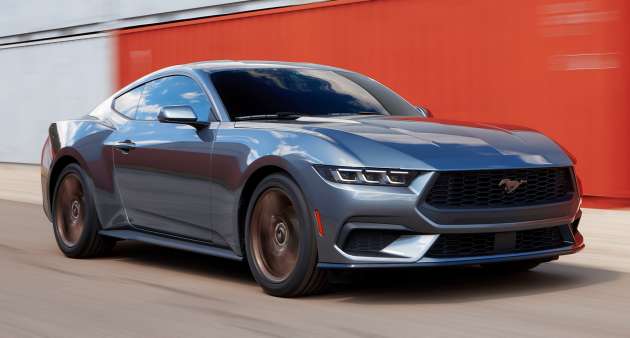 Ford has launched the all-new seventh-generation Mustang (codenamed S650) to replace the previous-generation model, which made its debut almost 10 years ago in 2013.

The 2024 Ford Mustang is available with two updated engine options, a 5.0 litre naturally-aspirated Coyote V8 engine for the GT variant and an all-new 2.3 litre turbocharged four-cylinder EcoBoost engine. Transmission options include a six-speed manual with rev-matching and a 10-speed automatic gearbox. Six driving modes are available including Normal, Sport, Slippery, Drag, Track and a customisable setting with up to six individual profiles.

The V8 engine features dual air intake box and dual throttle body design to minimise induction loss with higher air flow. For the first time, the Mustang allows its owners to rev the engine remotely using the key fob without even getting into the car via the Remote Rev feature. 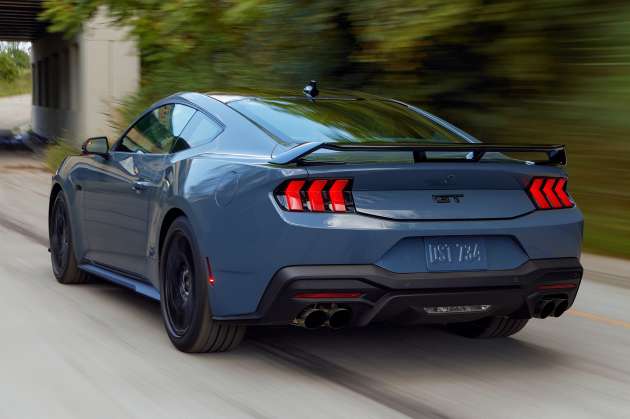 Up front, signature Mustang cues have been retained such as the tri-bar LED headlamp design, although the graphics are now more prominently featured across the light fixture. The new Mustang also sports a new, larger front grille influenced by the original 1960s design.

The GT variant of the Mustang differentiates itself from EcoBoost variants with large grille openings for better airflow towards the engine, along with hood vents and a front splitter. It may not be obvious, but the Mustang’s roofline has also been redesigned for easier entry and exit of the vehicle, especially with a helmet on.

At the rear are shorter overhangs and wide rear haunches to emphasise the athleticism of the muscle (sorry, pony) car. The new Mustang’s signature tri-bar taillamps come with a slightly arched appearance and a redesigned diffuser for better aerodynamics. Animated welcome lighting greets occupants as they approach the vehicle.

As for the convertible, the fully-lined and insulated fabric roof can be opened through a one-touch operation using a single-handle centre latch, and is tucked into a trunk big enough to accommodate two golf bags. Wheel sizes range from 17 to 20 inches, with 11 exterior colour options including new colours such as Vapor Blue and Yellow Splash. Brake calipers can be finished in either black, red or Grabber blue.

When customising the drive modes, the Mustang’s current setup is displayed in real-time renderings and in true video game fashion, the settings can be adjusted by swiping the graphic to rotate the car. For a less cluttered display, there’s even a ‘calm screen’ option with minimal details. 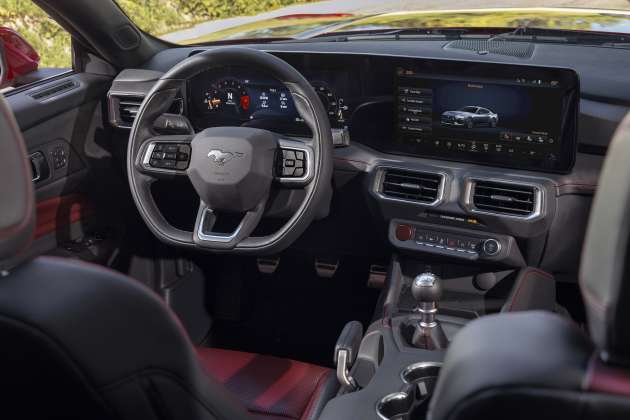 The Mustang’s new copper appearance on the digital instrument cluster takes after the fully electric Mustang Mach-E, and can be optionally configured to flow seamlessly into the 13.2 inch SYNC 4 infotainment display tucked behind a single piece glass. Physical buttons for the radio and climate control have been removed and integrated into the digital display as a result from research with traditional Mustang drivers, Gen-Z and millennials.

As standard, the Mustang comes with fabric seats with optional suede inserts and black seat belts while the Premium models are distinguished by accent stitching on the door trims and dashboard. The EcoBoost models feature Ford’s ‘ActiveX’ synthetic leather upholstery while the GT variants get leather seats. Full leather steering, upholstery perforation and colour coordinated seat belts are available in higher variants.

Other onboard features include wireless charging and overhead USB ports, along with a Bang & Olufsen sound system, Apple CarPlay and Android Auto. Amazon Alexa Built-In with Ford Streaming is also available to access music and podcasts via voice command.

With the FordPass app, users can remotely start and stop the vehicle, lock and locate it and schedule a start time. It also gives users access to the vehicle’s health and status checks. Assembled at the Flat Rock assembly plant in Michigan, USA, the all new Mustang will go on sale in the US in the summer of 2023.