Another biker kicks, destroys a car’s side mirror whilst on the move in Malaysia, this time on a Kia Cerato 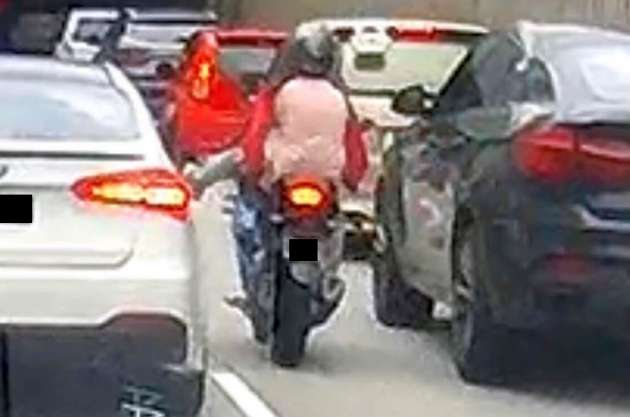 Earlier today, a short video clip showed a Shopee rider kicking and destroying the left side mirror of a Porsche 911 attempting to do a slow lane change. It turns out it isn’t the only video of that sort being shared on the DashCam Owners Malaysia FB page today.

In another post, a video – recorded yesterday – shows a similar situation taking place, this time involving a Kia Cerato. In the clip, the car is inching along in slow moving traffic in the middle lane, but is veering slightly to the right as it progresses down towards a tunnel. However, is still within the boundary of its lane.

A motorbike comes speeding down the road, travelling in lane splitting fashion between the centre and right lane. There’s still plenty of room for the bike to pass without incident, because the car parallel to the Kia is ambling well on the right-most side of its lane.

However, the biker isn’t content to let it be. Without pausing to slow down, he sticks out his left leg as he approaches the Kia, and takes aim at the side mirror. As it was with the Porsche, the Kia’s side mirror didn’t stand a chance.

While one can argue that the Kia was veering a little too close to the edge of the lane, the biker should also have been going much slower. Whatever the case, there was no reason to do what he did, which was pure malice. Again, while no one was hurt in the incident, the biker’s action of causing damage to another vehicle does constitute an offence.

That makes two such incidents in two days. As we’ve said, lane splitting isn’t a crime, but causing damage to property in such manner is. Thinking it is one’s absolute right to move unimpeded at the fastest speed possible and viewing everything else on the road as a hindrance to your progress is just poor mentality, but given the way things are and how mindsets work, nothing will change. Stay safe out there, folks.