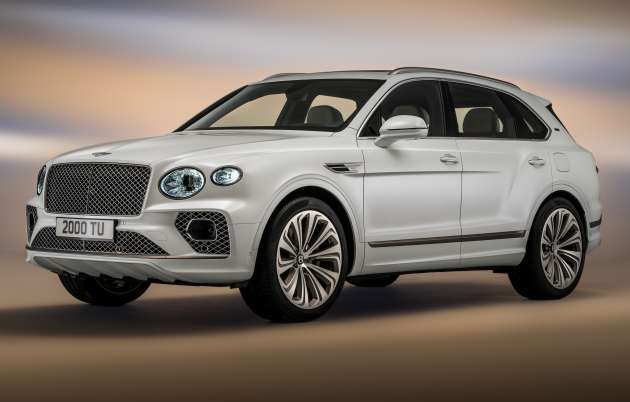 Bentley has revealed what it terms the most sustainable Bentayga – the Odyssean Edition is based on the Bentayga Hybrid and is limited to just 70 units. Production is expected to begin in Q1 of 2023. This follows the Flying Spur Odyssean Edition, which was revealed last year.

With a focus on sustainability, the open-pore Koa veneer of the Bentayga’s centre console uses 90% less lacquer than high-gloss veneers. The open-pore veneer is painted with just three ultra-thin layers of lacquer with a total thickness of just 0.1 mm.

Sustainable natural leather is also used across the cabin, which features beautifully-crafted tweed made from 100% British wool. Interior accents are also made up of soft, warm hide called Autumn to complement the various types of leather offered, including Beluga, Porpoise, Cricketball, Brunel and Burnt Oak. The result is a unique three-colour cabin palette – a first for the second-generation Bentayga. Odyssean Edition-specific branding can be found on the door sills and D-pillar, along with exclusive ombre embroidery across the width of each seat. Also fitted on the Odyssean Edition are 22-inch ten-spoke wheels, and the SUV gets a choice of six exterior colours specially curated for it, complemented by Pate Brodgar accents for a serene appearance.

Sustainability aside, the Odyssean Edition also prioritises well-being and comfort with the Front Seat Comfort Specification. This offers 22-way seat adjustability along with heading and ventilation features. Equipped with the Touring Specification, the Odyssean Edition’s driver assistance system features adaptive cruise control, lane assist, traffic assist and Bentley Safeguard for a suite of onboard radar and camera systems to monitor traffic conditions.

The Bentley Bentayga Hybrid produces 449 PS and 700 Nm of torque from a 3.0 litre V6 turbocharged petrol engine with an integrated electric motor-generator. The 0-100 km/h sprint take just 5.5 seconds, with a 254 km/h top speed. With a 17.3 kWh battery, the Bentayga hybrid’s pure electric range is 40 km, based on the WLTP cycle.

The Bentayga Hybrid has a dedicated button that allows control over its three E modes – EV Drive, Hybrid Mode and Hold Mode. EV Drive mode is engaged as soon as the car is switched on and based on data from the Bentley Hybrid Efficiency Navigation system, the pedal will vibrate when approaching a junction to advise the drive to lift off the throttle to save energy. In the pure electric mode, top speed is up to 135 km/h.

Hybrid Mode maximises vehicle efficiency and range based on data from the intelligent navigation system. In this mode, the Bentayga Hybrid continuously calculates the most efficient use of battery power and stores electric power for parts of the journey which require it. Hold Mode balances engine and electric power to reserve battery power for later use.

More than 50% of Bentley’s model range is now electric, with seven hybrid models out of 14. By 2025, the full Bentley line-up will be offered with hybrid powertrains, leading up to the launch of the first-ever Bentley battery electric vehicle (BEV).