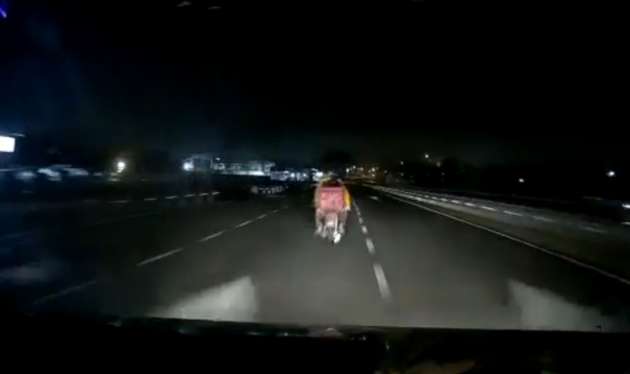 To a motorist, visibility – and being visible – is everything. Being able to see the terrain and conditions in front of you, or being clearly identified as a moving variable by other motorists, doesn’t mean that nothing untoward won’t happen, but it reduces the equation that something bad will.

In a video clip through a tweet, a car is seen travelling in the late of night on an unidentified highway in Malaysia. Moving down the stretch of highway, which was unlit, the driver comes right on top of a motorcycle running without a tail light in the middle lane, at which point there’s no time to take evasive action.

The combination of a fast car, dark road conditions and a motorcycle without tail lights and riding in the middle lane provided all the ingredients for this unnecessary mishap. Some may place blame squarely on the rider for not having a working tail light, while others will likely say the driver is moving too fast for the poor lighting conditions, but the fact remains the driver did not see the motorcyclist from distance, at all, until it was too late.

There’s no point apportioning blame, because everything contributed to this scenario unfolding. Molaysian motorists – both in cars and on motorbikes – tend to be a lackadaisical lot, especially when it comes to road safety, and this is a case in point.

Riders should always remember the onus is on them to be safe. Always ensure the lights on your motorcycle are working, because the law actually requires it, and wear reflective riding gear. Drivers entering unlit stretches of road at night, no matter if perceived to be clear of traffic, should always slow down, because you never know what could pop up in front of you – empty public roads don’t make them a race track. Remember, no one is responsible for your safety on the road but yourself, and this applies to drivers too.