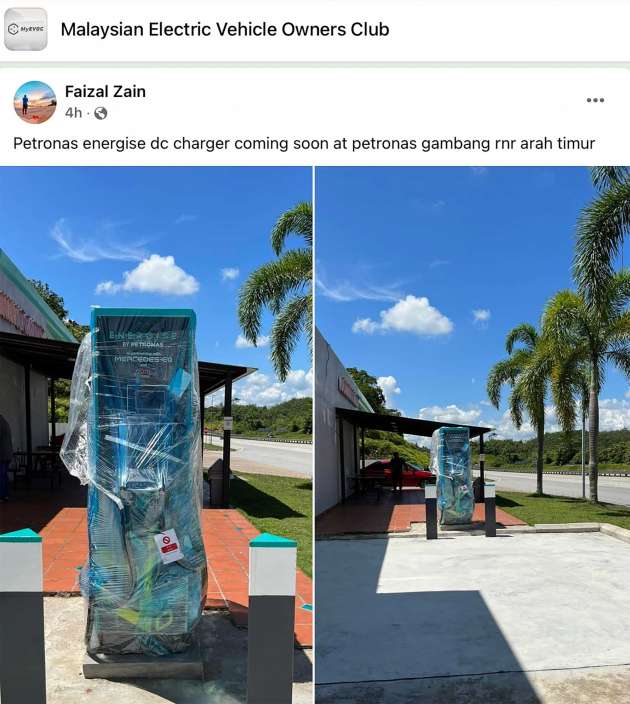 Good news for EV users in Malaysia – more DC fast chargers along highways are coming out way! Seen here is a new 180 kW DC fast charger with Energise by Petronas branding at the Petronas station at Gambang east-bound R&R on the East Coast Expressway.

Energise by Petronas was announced in March 2022, in partnership with Mercedes-Benz Malaysia (MBM) and EV Connection (EVC). EVC is the company running the JomCharge charging app.

JomCharge also currently powers the EV charger listings in the Setel app, so you can expect to be able to pay for these Energise by Petronas chargers via the Setel app too.

When the Energise by Petronas brand was launched, we were informed the network would start off with 5 chargers – one close to Ipoh, two for the southern region and two for the east coast. The chargers would be installed at strategic locations along the North-South Expressway (NSE) as well as the East-Coast Expressway (ECE). Looks like this charger is one of the ECE chargers.

The 180 kW charger looks like it sits in the middle of two parking lots, so we’re guessing it’s going to be a 2 x 90 kW configuration just like Shell Recharge’s Tangkak station’s initial configuration. It will join the existing ChargEV 22 kW AC charger already available there.

Shell Recharge has since reconfigured the Tangkak DC charger to 1 x 180 kW instead of 2 x 90 kW, presumably to allow Porsche Taycans to charge at a higher speed since that station was launched in partnership with Porsche.