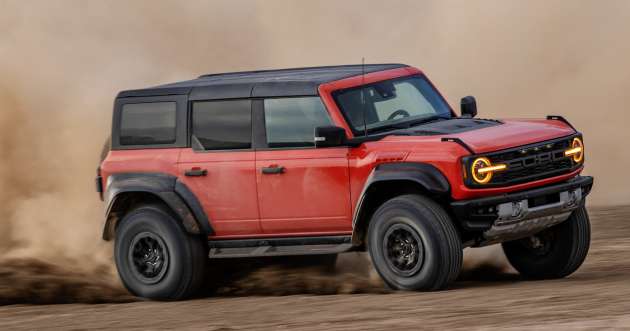 The 2022 Ford Bronco Raptor made its debut at the beginning of this year, touted at its launch as the most powerful road-legal Bronco yet. It was already made known at the time that the off-roader would sport a 3.0 litre, twin-turbo EcoBoost petrol V6 engine producing in excess of 400 hp, however exact figures were not provided at the time.

Now they are, and Ford CEO Jim Farley announced on Twitter that the Bronco Raptor officially makes 418 hp and 440 lb ft or torque, or 596 Nm. The same engine in the Ford Explorer ST outputs 400 hp and 563 Nm of torque.

Here, the 3.0 litre biturbo V6 in the Bronco Raptor gains Raptor-specific tuning as well as improved intercooler and air induction systems which have been designed to better cope with higher ambient temperatures encountered in desert environments. On the exhaling side of the engine, a dual-exhaust system features active valving and near-equal length piping for improved sound. This is also driver-selectable through four modes – Quiet, Normal, Sport and Baja. 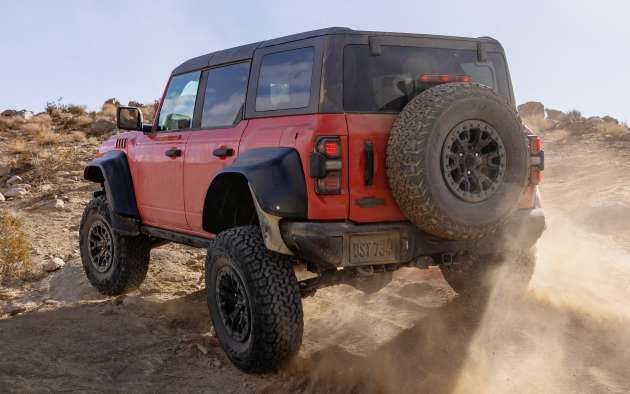 Drive is sent to all four wheels through a 10-speed automatic transmission, which can be manually controlled by the driver via magnesium shift paddles. For the Bronco Raptor, its transfer case is upgraded to feature a 3.06 4×4 LO ratio to yield a 67.7:1 crawl ratio. Axles are shared with the Bronco DR racing SUV, with a semi-float Dana 50 Heavy-Duty AdvanTEK with 235 mm ring gear in front and a Dana 44 AdvanTEK front axle with 210 mm ring gear and upgraded half-shafts at the back.

Suspension is key for something that touts off-road performance, and here the Bronco Raptor packs High-Performance Off-Road Stability Suspension (HOSS) system with Live Valve technology courtesy of suspension specialists Fox. These use internal bypass semi-active dampers with integrated reservoirs up front and remote reservoirs at the back, and sensors detect terrain conditions and adjust tuning hundreds of times per second.

In terms of structure, the suspension is bolted to a high-strength steel frame with Bronco Raptor-specific control arms, offering 330 mm of travel in front and 356 mm at the back, representing suspension travel gains of 60% and 40% respectively. 249 mm-wider fender flares house 37-inch all-terrain tyres on 17-inch beadlock-capable wheels, and the larger rolling stock is handled by an upgraded steering rack and tie rods.

Congrats to the @FordPerformance team for taking #BuiltWild to a new level! pic.twitter.com/l46WV8zjqF