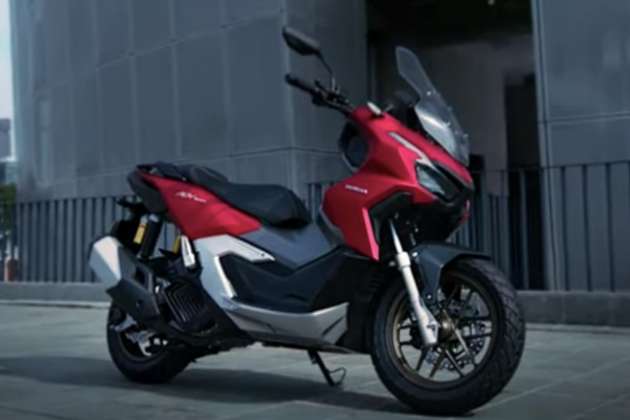 Getting its official launch in Indonesia after a series of teaser videos is the 2022 Honda ADV 160. There are two ADV 160 models on offer, the Combined Braking System (CBS) version at 36 million rupiah (RM10,624) and the ABS and traction controlled equipped variant at 39.25 million rupiah (RM11,583).

Cosmetic changes to the ADV 160 from the previous ADV 150 are minimal, with the head and tail lights remaining the same but there are some changes to the body panels. Aside from that, the two-position hand-adjustable windshield is now taller while the USB charger located inside the front cowl is retained.

A big change has been made in the set, now lowered to 780 mm from the previous 195 mm, making things easier for shorter riders. Increasing in size is the under seat storage compartment, gaining 2 liters to measure a full 30 liters in this second generation ADV 160.

Other specifications are similar to the ADV 150 that was introduced in 2019, including the telescopic front forks and twin Showa shock absorbers at the back. Asymmetrical wheel sizing is used, a 14-inch wheel in front and 13-incher at the rear, shod with 110/80 and 130/70 tyres, while a smart key system as used previously in the ADV 150 is carried over.