The US National Transport Safety Board (NTSB) has proposed some interesting ideas to make the road a safer place. With it, tens of thousands of fatalities from drunk-driving and speeding in the USA can be avoided.

According to a statement by NTSB, it is urging the National Transport Safety Administration (NHTSA) to make certain features in new cars mandatory. They include in-car breathalysers or monitoring systems capable of limiting and preventing vehicle operation if it’s detected that the driver is impaired.

While it did not elaborate on the ‘hows’, it should involve a myriad of sensors aimed at the driver and his/her inputs. This follows after a bill was passed in the USA stating that ‘advanced drunk and impaired driving prevention technology’ should be standard in all new passenger cars. That said, no timeline was given on its rollout.

Currently, most new cars are fitted with features to detect driver attention and fatigue, prompting them to rest after prolonged driving. The NTSB also called for automakers to consider fitting ‘an intelligent speed adaptation system that would prevent speed-related crashes’. According to the NHTSA, there were 11,258 road fatalities in the USA as a result of speeding. 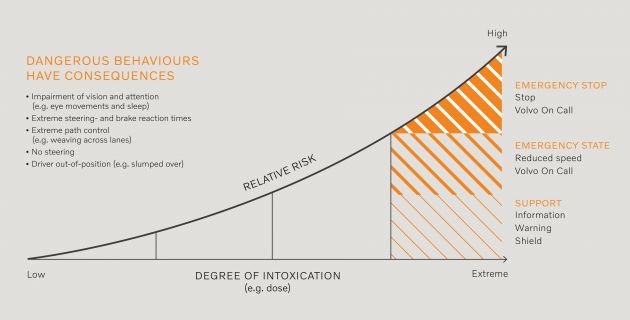 On that note, car companies like Volvo has announced that its new cars will be limited to a 180 km/h top speed, as there is no reason to exceed it. The 180 km/h limit will also apply to new Volvo vehicles in Malaysia. New Volvo vehicles now also come with in-car cameras to prevent drunk driving.

According to the NHTSA, over 230,000 fatalities from accidents involving alcohol impairment have been reported in the USA since 2000, 11,654 of which were from 2020 alone. The figure represented a 14% increase from 2019 in road fatalities from drunk driving. At the other end of the globe, the Traffic Accident Commission (TAC) in Australia reported that 20% of road fatalities involved drivers with a blood alcohol content (BAC) over the 0.05 limit. The legal BAC limit in the USA is 0.08.

BAC measures alcohol content in the blood and is calculated in grams per 100 ml of blood. Hence, a BAC reading of 0.08 means your blood is 0.08% alcohol by volume. In Malaysia, in light of rampant drunk driving, new laws were introduced in 2020 to contain the issue. The new limit is now 50 mg of alcohol in 100 ml of blood (0.05) in line with the World Health Organisation guidelines.