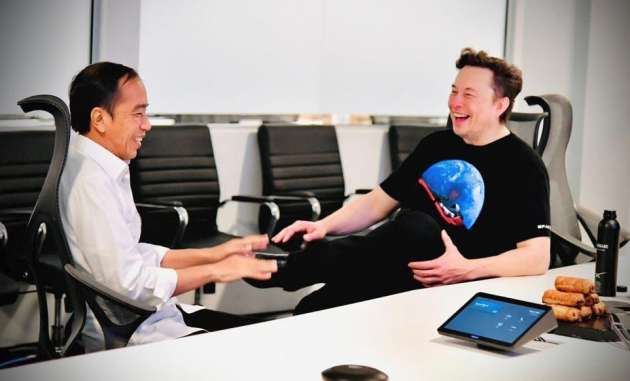 Following his meeting with Indonesian president Joko Widodo over the weekend at the SpaceX site in Boca Chica, Texas, Elon Musk says he is considering a visit to Indonesia later this year to explore investment opportunities in the republic, Bloomberg reports.

During the visit, the Indonesian leader – who was in the country to attend the US-Asean Special Summit – extended an invite to Musk, who replied, “Hopefully in November, thank you for the invitation.” The invitation to Musk comes after Tesla representatives paid a visit to a nickel production hub in Morowali, Central Sulawesi last week.

The meeting between Musk and Jokowi had been arranged last month by the country’s coordinating maritime affairs and investment minister Luhut Pandjaitan, in the hopes of getting Tesla to invest in Indonesia, reports The Jakarta Post.

The government has held talks on potential partnerships with Musk’s teams over course of the last few years, including on the production of Tesla EVs and even the possibility of a SpaceX rocket launch site in the country, the latter part of the country’s ambition to join the space race, but no agreements have been reached so far.

Indonesia’s discussions with Tesla on the probability of setting up a factory in the republic to make batteries for its EVs fell through in March, apparently because Tesla was only interested in building batteries for energy storage systems (i.e. its Powerwall) instead of that for its cars. However, it was reported last month that Indonesia had restarted talks with Musk to join the country’s burgeoning nickel and EV industry.

The country has long been pushing for investments in EV and battery manufacturing, touting its reserves of nickel and cobalt – used in the production of lithium-ion batteries – as well as bauxite, which can be turned into aluminium. Indonesia, which has the world’s biggest nickel reserves, wants to build a full supply chain for extracting battery chemicals from the metal rather than simply exporting it.

Jokowi’s invitation to Musk reiterates the country’s intent to continue its efforts to develop its EV industry, and not just with the production of raw materials. In August last year, he said that the country had a great opportunity in developing industries from upstream to downstream, and that it should focus on the lithium battery industry as well as the production of EVs.