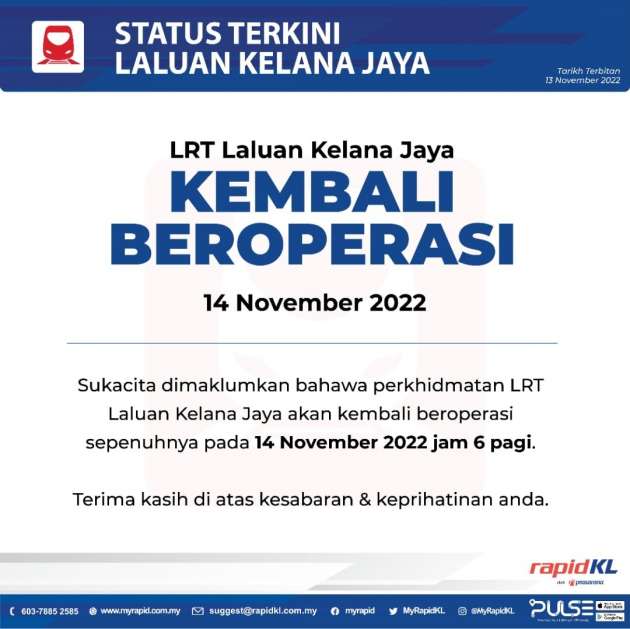 Rapid Rail has announced that the LRT Kelana Jaya Line will reopen in full starting at 6am on Monday, November 14. The resumption of services at 16 stations on the line that have been closed since November 9 comes two days earlier than scheduled, following approval from the land public transport agency (APAD). The KJ Line was supposed to resume services in full on November 16.

The company said that based on the analysis of extensive tests carried out by Rapid Rail technical experts and OEM supplier Thales Group, APAD has confirmed the stability of the automatic train control (ATC) system and declared the LRT Kelana Jaya Line service safe to operate fully.

“We are grateful to APAD for the approval that has been given to continue the LRT operation of the Kelana Jaya Line. Now, we can return to providing the best service to all the citizens of the city. Monitoring of the system will continue to ensure it remains stable so that services can run safely,” Prasarana president and group CEO Mohd Azharuddin Mat Sah said in a statement.

“We once again emphasise that the decision taken (to close the 16 stations) was for the safety of users. The full opening of the service earlier than that scheduled is expected to reduce the difficulties experienced by public transport users, especially those using the Kelana Jaya Line,” he added.

The company also said that it will compensate users with free rides for seven days. Previously, Rapid Rail had announced free fares to KJ Line users for every day of the service disruption. Although the service will have been suspended for a total of five days, users will be given free travel for seven days. This will apply to all users, be it My50 pass holders and those using Touch ‘n Go card or tokens.

Prasarana and Rapid Rail again apologised to all who were affected by the interruption of the LRT Kelana Jaya Line service, and said that every effort will be taken to ensure that such a disruption will not happen again.

“We would like to thank everyone for your patience during this very challenging period. We would like to express our deepest appreciation to all those who have extended help and support, especially Smart Selangor, MARA Liner, Kuala Lumpur City Hall and also Malaysians who have provided assistance to the affected passengers,” said Azharuddin.