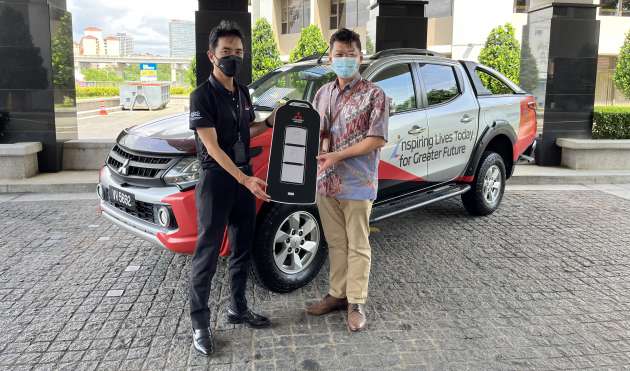 Mitsubishi Motors Malaysia (MMM) has donated a Triton to the National Cancer Society Malaysia (NCSM), a non-profit organisation (NGO) established in 1966 that provides an extensive range of care services and support to people affected by cancer.

The Mitsubishi pick-up truck will be used by NCSM to travel to rural communities where residents have little or no access to cancer screening facilities, particularly those in low-income urban areas and suburban villages.

“Mitsubishi Motors supports NCSM’s noble efforts in carrying out their mission to raise public awareness on cancer prevention, screening and early detection. In line with our CSR vision ‘Inspiring Lives Today for a Greater Future’, we know that success isn’t solely measured by the vehicles we put on the road, but also by the lives we enrich along the way,” said Shinya Ikeda, CEO of MMM.

As part of a responsible Malaysian society, we are pleased to fulfil our CSR by utilising the innovative strength of our 4x4s for the greater improvement of society,” he continued. “Over the years, the award-winning Triton pick-up truck has passed many endurance tests and has been put through the harshest road conditions. We hope that the Triton will gain NCSM access to many places and assist as many people as possible,” Ikeda-san added.

NCSM is funded entirely by voluntary contributions from the public (you can make a donation here) and provides holistic cancer support to patients and caregivers in understanding and dealing with cancer in various phases through various initiatives.