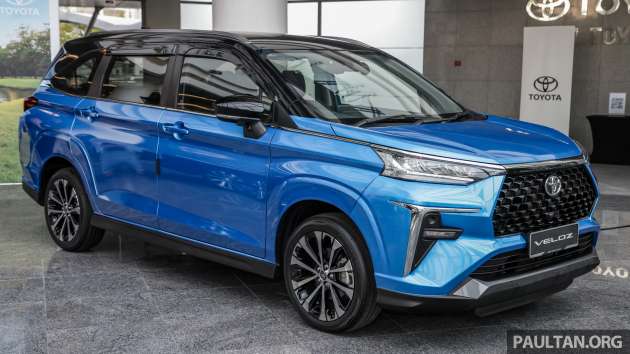 UMWT Toyota Motor (UMWT) has launched the Toyota Veloz seven-seater MPV for Malaysia, with the Japanese brand now bringing the sister vehicle to the Perodua Alza at a higher positioning with pricing to match, as a single model variant priced at RM95,000 on-the-road without insurance.

Manufactured in Sungai Choh, Rawang, the Malaysian-market Veloz is one of four related models based on the Daihatsu New Global Architecture (DNGA) platform, the other three being the Avanza (for Indonesia), Daihatsu Xenia and locally, the aforementioned Perodua Alza. The shift to the new platform means a change to a transverse engined front-wheel-drive layout, compared to the RWD base of the previous Avanza.

Exterior dimensions for the Veloz are slightly larger than the Alza, measuring 4,475 mm long and 1,750 mm wide, or 50 mm longer and 20 mm wider than the Alza.

Key exterior differences on the Veloz for Malaysia in relation to the Perodua Alza begin with the LED daytime running lights, which are unique to the model for our market. Exterior kit consists of LED self-levelling headlamps with the ‘follow-me-home’ feature, along LED daytime running lights, the latter in a configuration unique to the Malaysian market, according to UMWT. 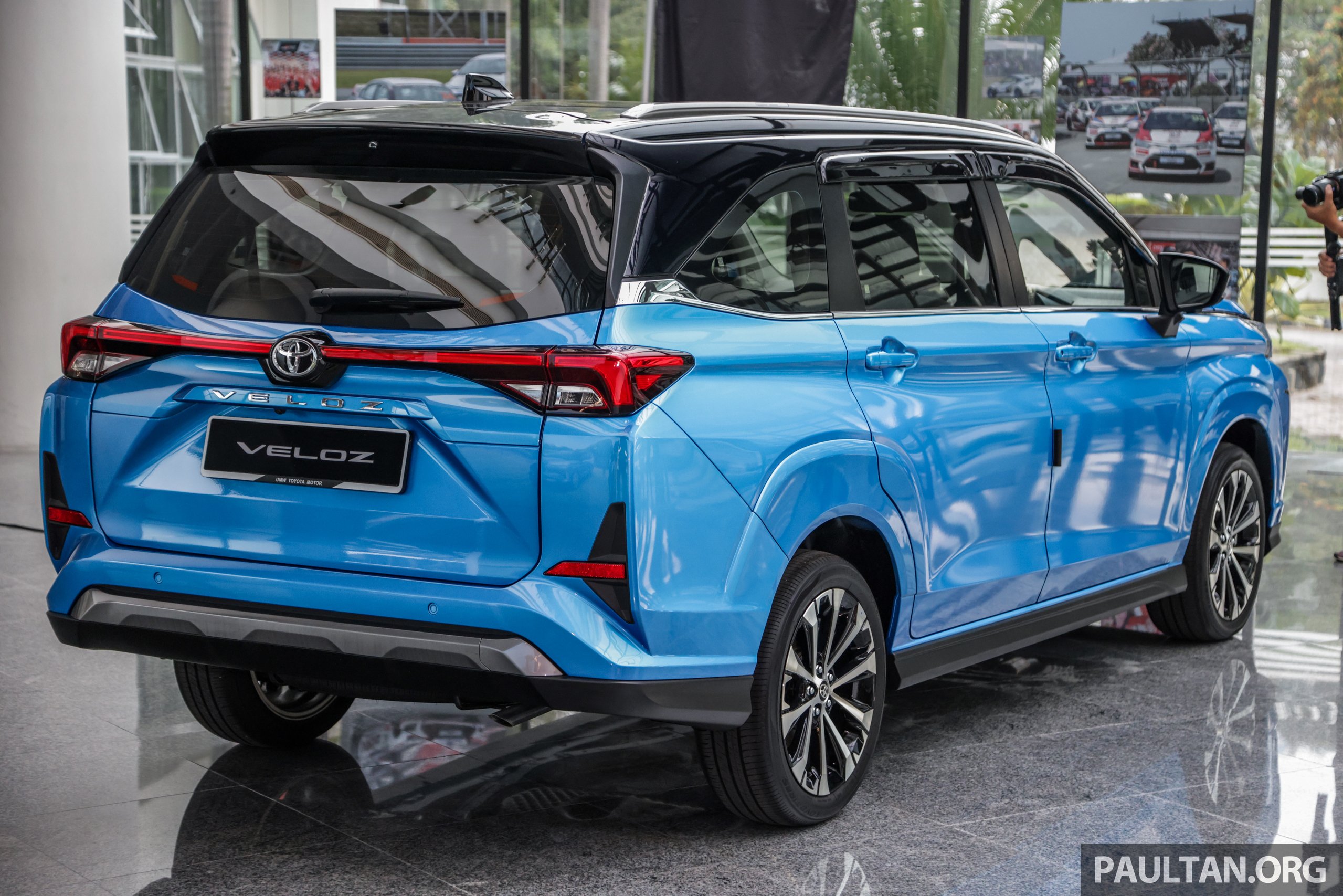 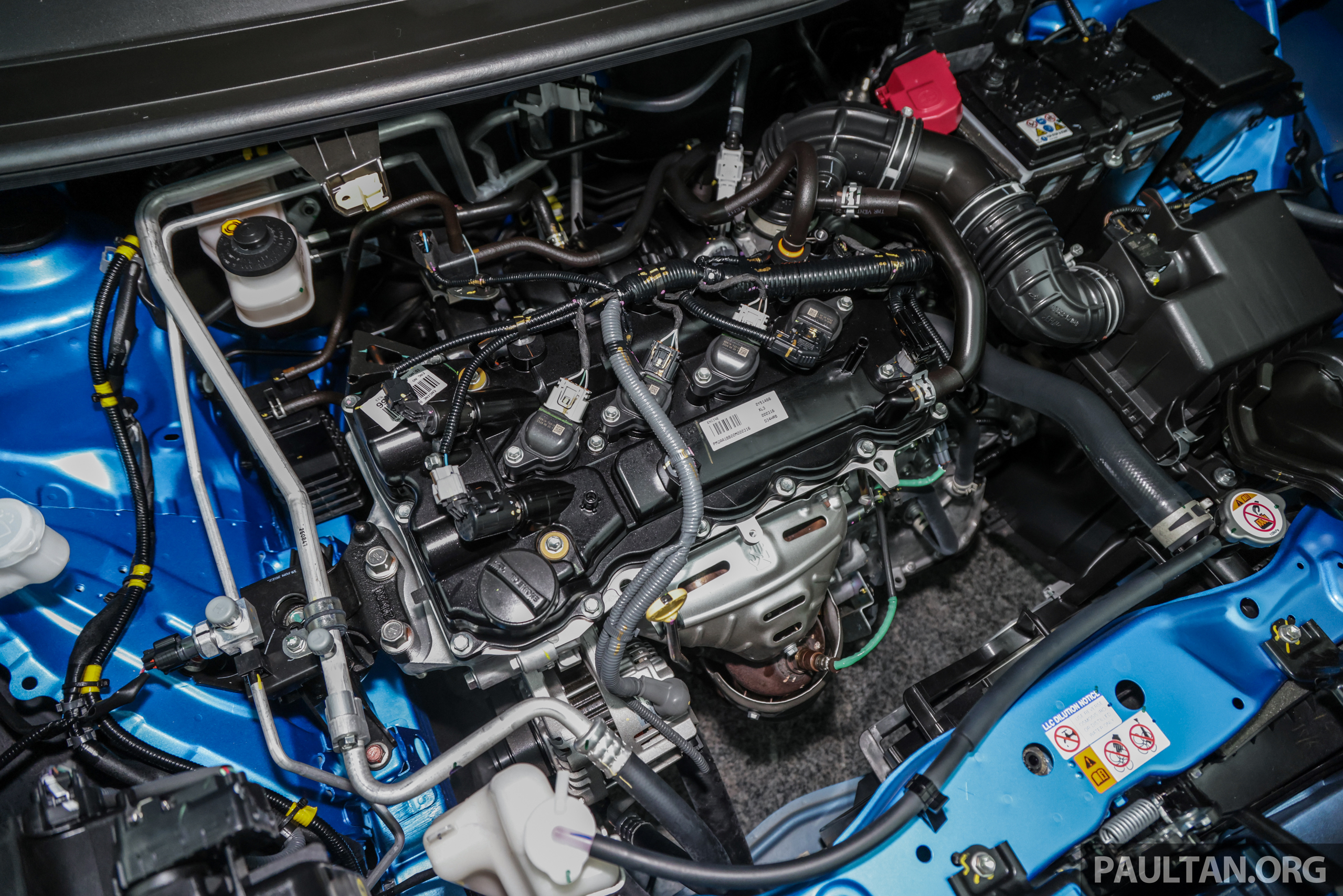 The rear end of the Veloz gets a full-width, three-dimensional tail lamp assembly, while the automatic-folding side exterior mirrors also feature foot lamps (puddle lamps) which switch on automatically. Atop the roof are low-profile roof rails, which are rated for a load capacity of up to 75 kg.

Powertrain comes courtesy of the 1,496 cc NR-VE inline four-cylinder petrol engine the produces 106 PS at 6,000 rpm and 138 Nm of torque at 4,200 rpm, driving the front wheels via a continuously variable transmission. This unit in the Veloz also offers the choice of manual input with seven virtual ratios. Three drive modes are offered; Power, Eco and Normal.

Rolling stock for the Malaysian-market Veloz is a set of 17-inch two-tone alloy wheels all-round, shod in 205/50 tyres. Ground clearance for the Veloz is 205 mm up to the central section of the exhaust muffler, or 190 mm up to the suspension hardware. This is 30 mm taller than the Alza, which stands at 160 mm of ground clearance. 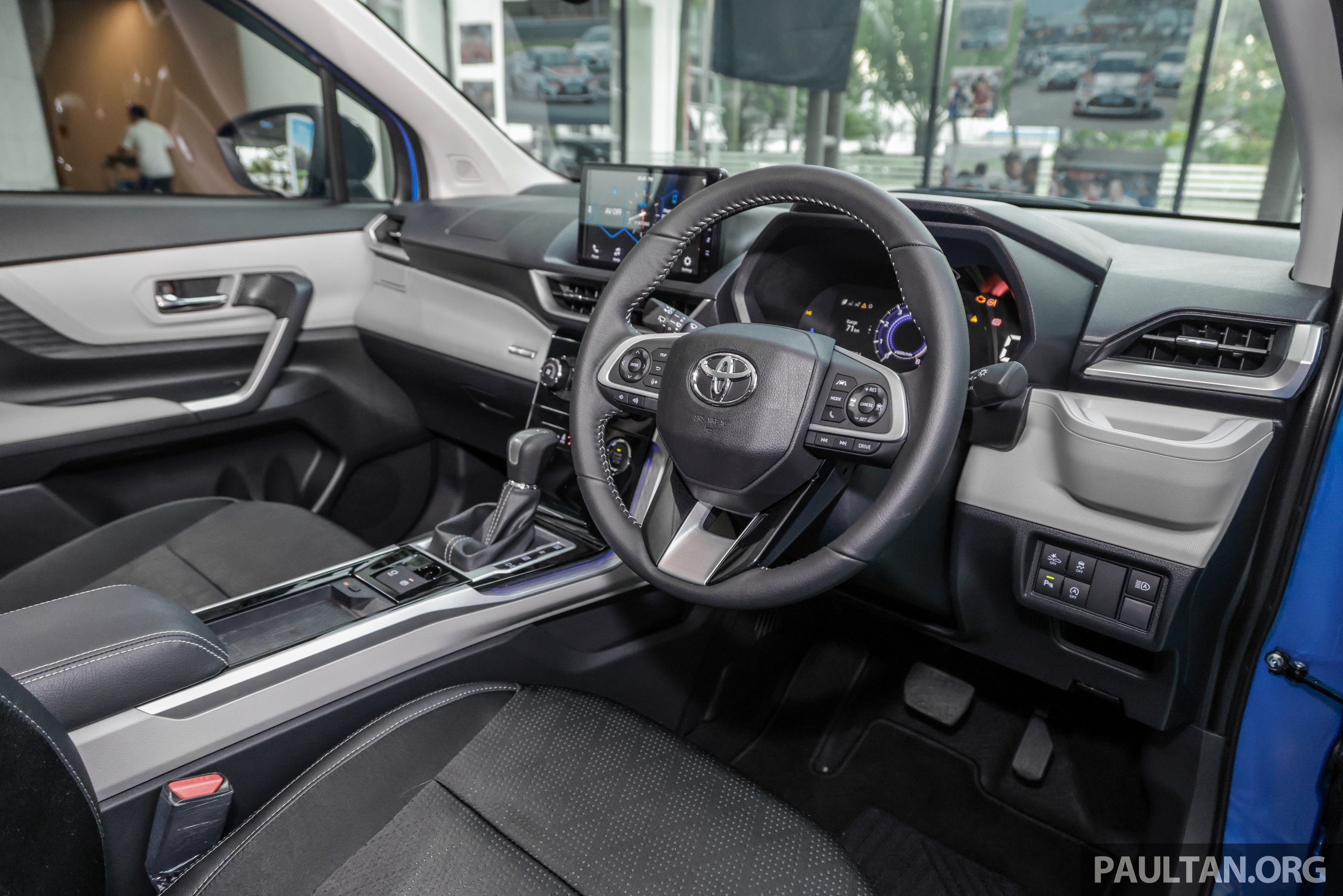 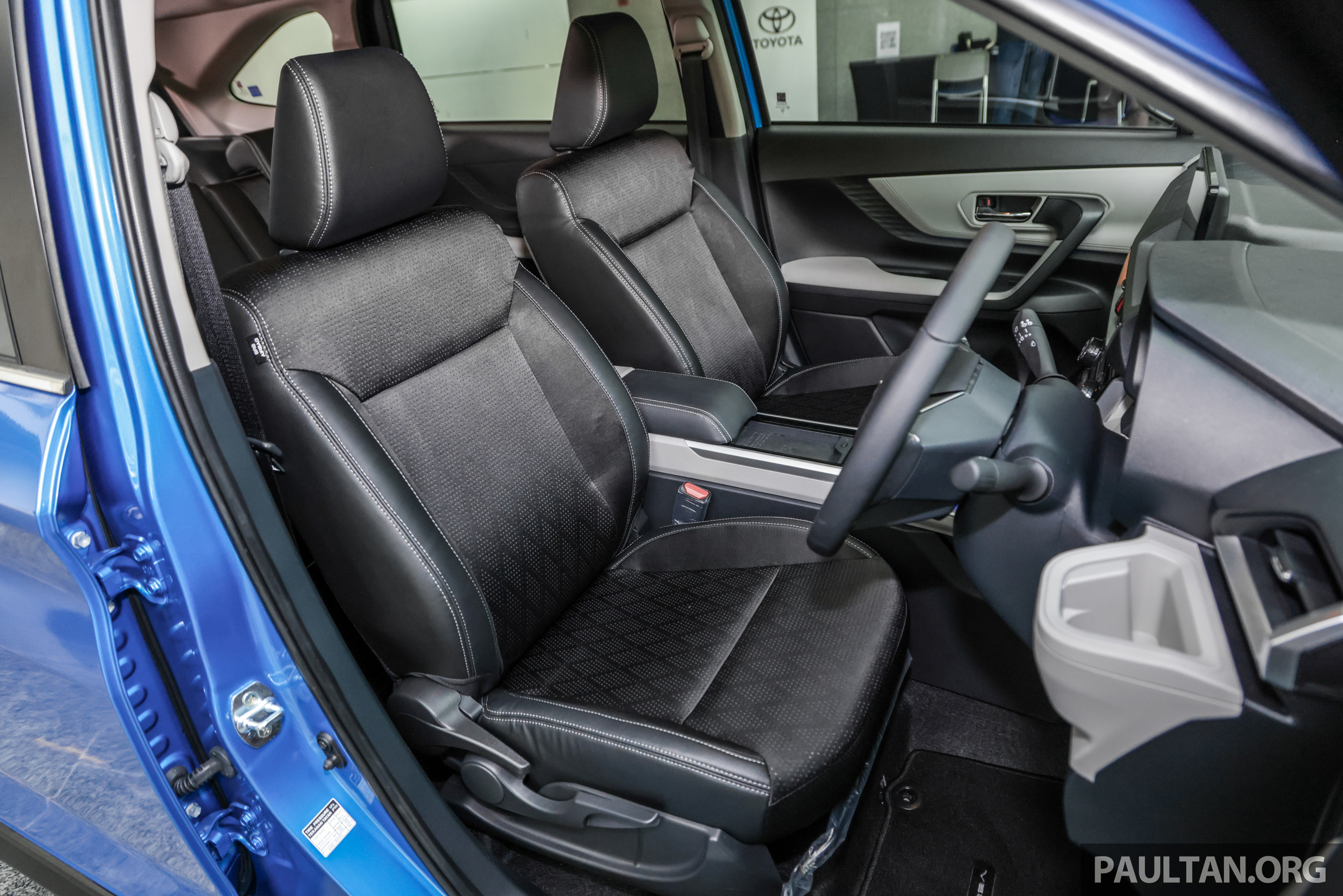 Inside, the seven-seater cabin of the Veloz for Malaysia gets semi-leather upholstery along with soft-touch padding on interior panels, and select panels trimmed in a lighter shade contrast with darker hue of the seats for a two-tone cabin; the contrast in the Alza is with a darker combination of black and dark red. Ambient lighting in the Veloz is located along the door trim panels and centre console.

Over the Perodua Alza, the driver in the Toyota Veloz additionally gains telescopic reach adjustment for the steering column; the Alza is tilt-adjustable only.

Infotainment is via a nine-inch display panel with smartphone connectivity provided by Android Auto and Apple CarPlay; wired and wireless on both counts (the Alza in top AV form maxes out with wired Android Auto). Wireless charging is via a charging pad of the Qi 2.4 wireless standard; further mobile devices can be charged through three USB charging ports in the cabin of the Veloz. Also on are two 12-volt power sockets, one of which is located near the window for the third-row seats.

Cabin cooling is courtesy of an automatic air-conditioning system, while second- and third-row occupants benefit from the ceiling-mounted rear vents with its own fan control switch. Ferrying a thirsty bunch? There are some 15 drinks holders located throughout the cabin of the Veloz. 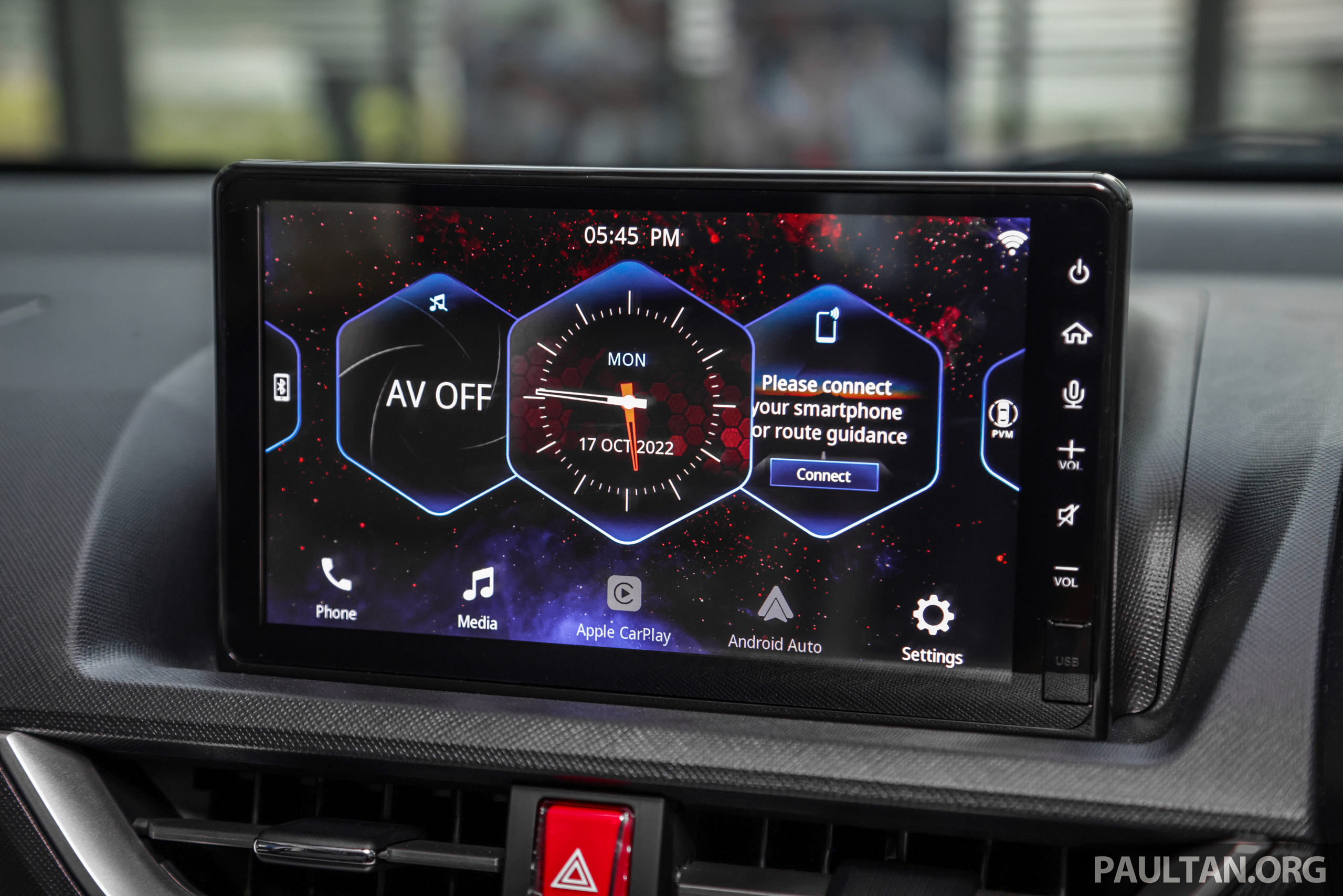 The Veloz also includes a dashcam, or digital video recorder (DVR) as standard, and a rear-facing camera unit can be additionally specified for an additional outlay of RM350. 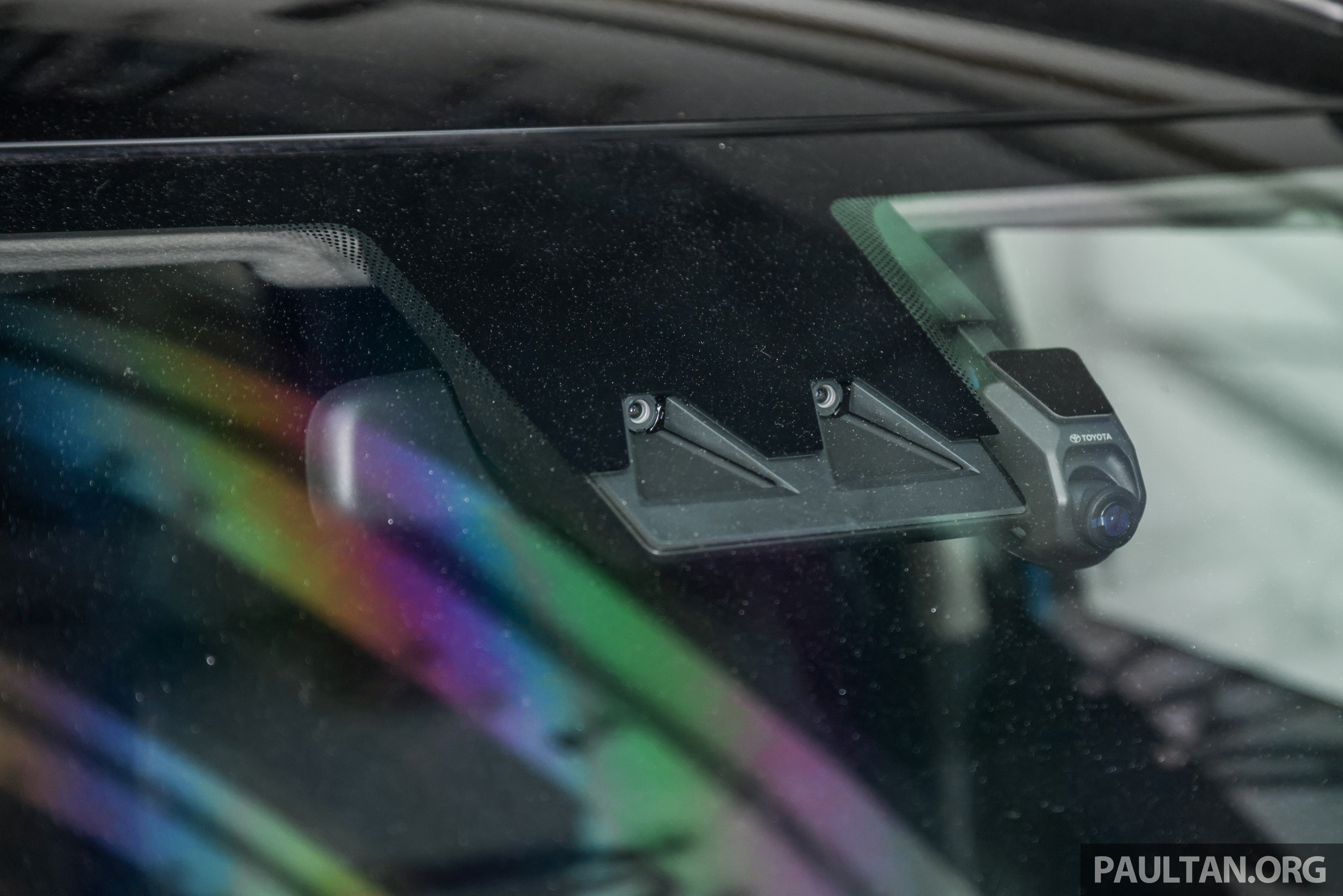 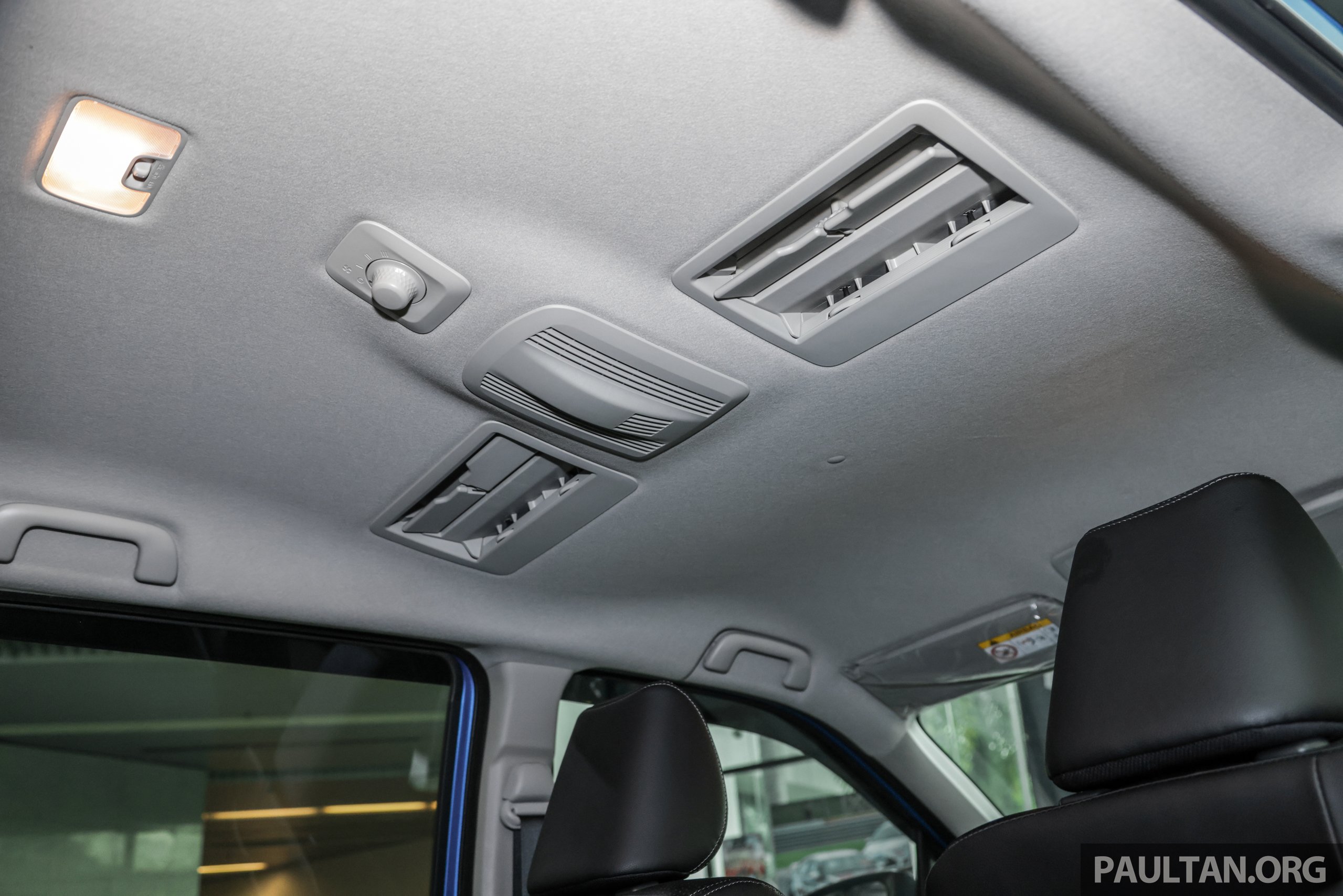 Every purchase of the 2022 Toyota Veloz in Malaysia comes with the three-year subscription for the vehicle telematics system (VTS), which enables a command centre to locate the vehicle via GPS signal in the event it is stolen, and the relevant authorities will be informed for its retrieval.

Priced at RM95,000 on-the-road without insurance, the Toyota Veloz is covered by a five-year, unlimited-mileage warranty. The 2022 Toyota Veloz comes in a choice of five exterior colours; Red Metallic, Metallic Bluish Black, White, Blue Metallic and Silver Metallic, the final two being two-tone schemes which combine a black roof finish for a premium of RM1,300.

What do you think, dear readers – is the 2022 Toyota Veloz in Malaysia worth the RM20k premium it commands over the Alza with the extra equipment included? Let us know in the comments section.