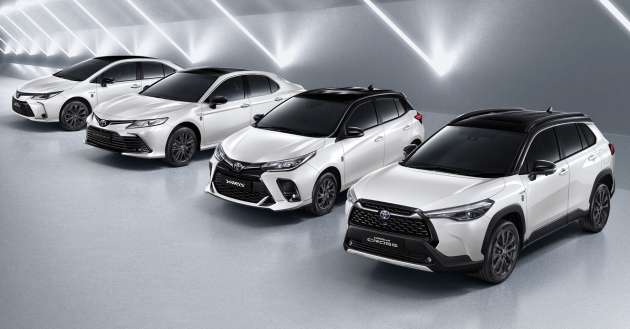 Toyota is celebrating six decades of operations in Thailand by releasing 60th Anniversary special editions of the Yaris hatch, Corolla Altis sedan, Corolla Cross SUV and Camry sedan. Each of these come with a unique two-tone colour scheme and badging to mark the occasion.

All units will be painted pearl white with a black roof (including the cant rails on the Yaris and Corolla Cross) and black door mirrors. Additionally, each dealer will receive one car wrapped in “Laminated Gray” film worth 57,000 baht (RM7,300), with interested buyers able to participate in a Hunt Your Uniqueness event on the official website to snag one.

Model-specific touches include a new front spoiler on the Yaris with a V-shaped body-coloured centre section, reminiscent of the Corolla Hatchback available in other markets. The two Corollas and the Camry also gain gloss black grilles (with a chrome bar on the Corolla Cross) and rear number plate garnishes, with the sedans also receiving black fog light trims.

Inside, all models are upholstered in black and white leather (mostly black in the Camry) with red and grey stitching and the “60th Anniversary” logo embossed in the headrests. A new T-Connect telematics function has also been added to the Yaris, Corolla Altis and Corolla Cross, adding navigation, concierge and emergency services via a smartphone app.

The rest of the cars remain unchanged, including the mechanicals. The Yaris continues to be powered by a 92 PS/109 Nm 1.2 litre VVT-iE four-cylinder engine mated to a CVT, while the Corolla models are based on the Hybrid and combine a 98 PS/142 Nm 1.8 litre Atkinson-cycle mill with 72 PS/163 Nm electric motor to produce a total system output of 122 PS. Both hybrids, by the way, forgo their blue headlight accents. 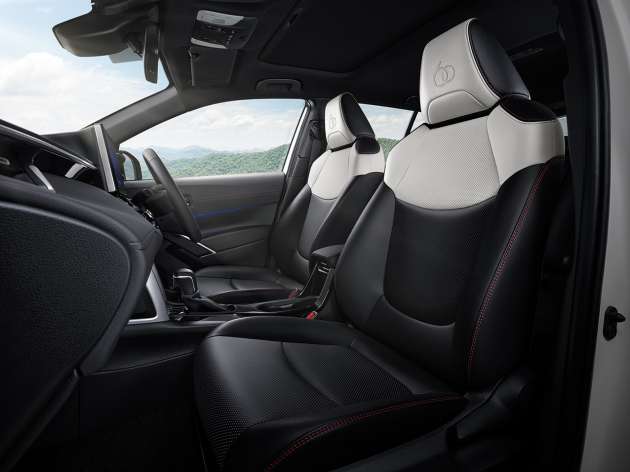 As for the Camry, that’s available in petrol and Hybrid variants. The former utilises a 209 PS/250 Nm 2.5 litre Dynamic Force engine and an eight-speed automatic gearbox, while the petrol-electric version pairs a 178 PS/221 Nm Atkinson-cycle 2.5 litre with a 120 PS/202 Nm electric motor for a combined 211 PS.

The 60th Anniversary models will be limited to 6,000 units, each coming with a key box containing a certificate, an Apple AirTag tracking device and a 60th Anniversary keychain. What’s more, every buyer will be entered to a lucky draw to win the upcoming GR86 sports car worth 2,949,000 baht (RM377,900).