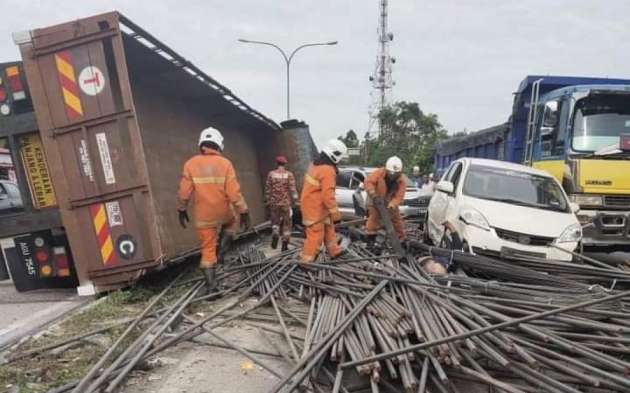 An incident straight out of a movie happened in Pasir Puteh, Kelantan recently, when a large trailer carrying iron rods overturned and caused a massive pile-up. It was reported that in total, the incident involved two lorries, four passenger vehicles, two motorcycles and 21 bicycles.

“Thirteen personnel from the Pasir Puteh and Tok Bali fire and rescue stations were deployed to the scene of the incident. There were five victims – a woman who died, a child who was seriously injured and three others who were lightly injured,” Pasir Puteh Fire and Rescue Station chief Azhar Elmi Mustofar told Bernama.

The victims were sent to the Tengku Anis Hospital nearby, while the clean up work were completed within two hours of the incident. It has been reported that initial investigations point towards the main trailer having had brake failure, which led to the accident.